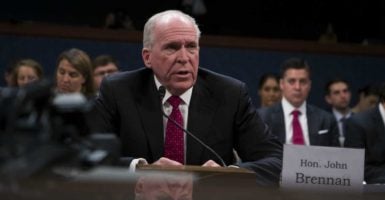 “It raised questions in my mind, again, whether or not the Russians were able to gain the cooperation of those individuals,” John Brennan says.

Still, some government watchdog groups don’t see how the testimony advances a probe that so far has shown no public evidence of ties.

During a House Permanent Select Committee on Intelligence hearing, Rep. Trey Gowdy, R-S.C., asked Brennan, “Did evidence exist of collusion, coordination, conspiracy between the Trump campaign and Russian state actors at the time you learned of 2016 efforts [in meddling with the U.S. election]?”

I encountered and am aware of information and intelligence that revealed contacts and interactions between Russian officials and U.S. persons involved in the Trump campaign I was concerned about because of known Russian efforts to suborn such individuals. And it raised questions in my mind, again, whether or not the Russians were able to gain the cooperation of those individuals.

I don’t know whether such collusion—that’s your term—existed. I don’t know. I know there was a sufficient basis of information and intelligence that required further investigation by the bureau to determine whether or not U.S. persons were actively conspiring, colluding with Russian officials.

“I think this committee now has access to the type of information that I’m alluding to here. It’s classified, and I’m happy to talk about it in classified session,” he said.

Though Brennan is a prominent figure, his testimony changes very little, said Matthew Whitaker, executive director of the Foundation for Accountability and Civic Trust.

“It put some color and context into things, but he didn’t know about collusion,” Whitaker told The Daily Signal.

However, Whitaker, a former U.S. attorney for the Southern District of Iowa, said FBI investigations don’t just start on a hunch.

“There is usually some smoke and it doesn’t just start on baseless news reports,” Whitaker said. “It could have been the intelligence that Brennan was talking about that he referred to the FBI. It’s one of the many things we could eventually find out.”

The White House did not respond to an inquiry from The Daily Signal specifically regarding Brennan’s comment on intelligence about contacts between Russians and associates of the Trump campaign.

Mueller has a sterling reputation, but it’s unclear whether a connection between a Trump campaign employee and Russians warrants a probe, said Peter Flaherty, president of the National Legal and Policy Center, a government watchdog group.

“In order to justify an investigation there needs to be an underlying crime,” Flaherty told The Daily Signal. “It’s not illegal for political consultants to drum up business with foreign entities, as long as they register. Could it be unseemly? Yes. Could it be unpatriotic? Yes. But it’s not illegal. Now, if a political consultant accepted foreign funds and turns around and promises a quid pro quo, that would be a criminal matter.”

While Democrats have pushed for getting to the bottom of any potential ties between Russia and Trump, several lawmakers conceded they don’t yet have evidence of coordination.

Feinstein, a California Democrat, responded, “Well, evidence that would establish that there’s collusion. There are all kinds of rumors around, there are newspaper stories, but that’s not necessarily evidence.”

Rep. Maxine Waters, D-Calif., while talking about impeaching Trump, in an appearance on MSNBC, was asked, “But just to be clear, there has been no actual evidence [of collusion] yet?”

She responded, “No, it has not been.”

After the Brennan testimony, though, Democrats made another push.

Listening to Brennan testify about Trump team’s contact w/ Russians it’s no wonder Trump is working so hard to obstruct the investigation!

After the hearing, the committee’s top Democrat, Rep. Adam Schiff of California tweeted:

Schiff, the ranking member of the House Permanent Select Committee on Intelligence, said Brennan’s testimony clearly shows the need to continue the probe.

“Today’s testimony by former CIA Director Brennan that the Russians brazenly interfered in our election, and that he became aware of interaction between Trump campaign officials and Russians that warranted referral to the FBI further, underscores the importance of our investigation,” Schiff said in a statement.