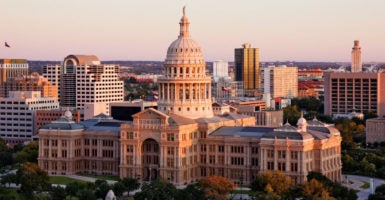 The Texas Senate early Monday passed a bill to allow faith-based adoption and foster care providers to operate based on their religious beliefs.

By a final vote of 21-10, state senators agreed with their counterparts in the Texas House of Representatives that society should continue to make room for adoption and foster care services associated with a religious tradition, whether Christian or Muslim.

Only one Democrat joined the Senate’s 20 Republicans in voting for the bill. The remaining 10 voted against it.

In an interview Monday with The Daily Signal, state Rep. James Frank, a Republican who co-wrote the legislation, predicted that Texas Gov. Greg Abbott would sign it.

“I am obviously very excited about it passing the Senate, and I fully expect … that Governor Abbott will sign it and it will be law,” Frank said, “and we’ll have, I hope, more people serving and free to serve children in the state of Texas.”

Abbott apparently has not taken a public stand on the bill.

But Frank said the Republican governor likely will sign the legislation into law in the next 60 days.

He and other proponents said the bill was intended to prevent faith-based organizations from being forced to violate their beliefs, such as by arranging for same-sex couples to adopt or provide foster care.

Called the Freedom to Serve Children Act, the bill also would protect faith-based organizations that decline to serve same-sex couples or other parties from litigation and the threat of closure for acting on their beliefs. It would allow them to refer would-be clients to another organization that has no such faith-based reasons to decline service.

Advocates for lesbian, gay, bisexual, and transgender Americans, including the Human Rights Campaign, opposed the bill.

In a statement issued Sunday, Marty Rouse, national field director for the Human Rights Campaign, decried the legislation as “a dangerous, discriminatory bill that shows the type of overarching anti-LGBTQ animus that is coloring so much of the Texas legislature this session.”

But Frank said Monday he hopes the change will open the field for more adoption and foster care providers.

“I really hope everybody and anybody who is qualified and wants to serve children in Texas will be signing up and feeling free to do that,” the lawmaker said.

Frank, whose 69th District includes Archer, Baylor, Clay, Foard, Knox, and Wichita counties, told The Daily Signal in an earlier interview that the legislation does not take away anyone’s rights.