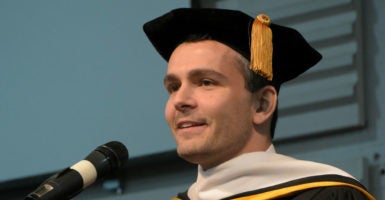 Be persistent in the pursuit of truth, Heritage Foundation scholar Ryan T. Anderson urged graduates Saturday during a commencement address at Franciscan University of Steubenville.

“The first thing to say about vocation is that it is intimately connected with truth—both metaphysical and moral truth,” Anderson said.

Pursuing and defending truth, he added, will be a lifelong task:

We will face this challenge everywhere our lives take us: in government service, in the marketplace, within our families, and in service to the church. And we must be prepared to defend truth as never before. …
When faced with secularist ideologies, we have the responsibility to show the world the harmony of faith and reason. And this only intensifies as you graduate today and enter a world that is simultaneously hungry for and resistant to your message.

“Vocation is intimately connected with truth. We must prepare to defend truth as never before.” ~ @RyanTAnd #FUS17 pic.twitter.com/SFzksGioFw

Anderson, 35, a senior research fellow at The Heritage Foundation who studies religious liberty, particularly its intersection with gender identity and marriage, also received an honorary doctorate of humanities during his appearance at Franciscan University, a Roman Catholic school.

The university in Steubenville, Ohio, cited “his persuasive defense of Catholic values in the public square as well as his role as a religious freedom expert,” according to a press release.

Anderson, whose formal title at Heritage is William E. Simon senior research fellow in American principles and public policy, already holds a doctorate in political philosophy from the University of Notre Dame. But Franciscan’s president, the Rev. Sean Sheridan, told the audience he is well deserving of an honorary degree as well.

“If you believe that marriage is the lifelong union of one man and one woman, you will quickly find yourself labeled a bigot and your beliefs described as ‘hate filled,’” Sheridan said during the ceremony. “Despite this heated opposition, Dr. Ryan Anderson has continually ventured into the cultural lion’s den to make the case for traditional marriage, traditional values, and religious freedom.” In 2013, Anderson addressed the graduating class of Regent University.

Ample opportunities exist to bear witness to the truth, Anderson told Franciscan’s graduates Saturday, regardless of one’s station in life:

Since our adversaries control the principal institutions of our culture, we have to work twice as hard as they do. We have to understand their arguments better than they understand those arguments themselves—so we can then explain, at the level of reason, where they’ve gone wrong. Even if your professional vocation will never bring you anywhere near these debates, you need to continue the learning that took place here at Franciscan and prepare yourselves for the discussions at the office water cooler and at Little League games, being ready to help your neighbors understand the reasons for the truth.

Anderson also urged the Franciscan graduates to be mindful of the needs of others:

Your parents and grandparents took care of you as a child, and you should start now preparing to take care of them. … But when Scripture speaks of honoring our mother and father, it doesn’t only mean behaving ourselves when we’re kids. It also means caring for our parents as they age. Whenever possible, inviting them into our homes, rather than sending them to a nursing home. Viewing them as our responsibility, not just Social Security’s.

The best witness to truth can be one’s own life, Anderson added:

Bear one another’s burdens, persevere through adversity, and let the family you create—the children you raise and the parents you care for—be your best long-term defense of life and marriage.

Anderson, who received his bachelor’s degree from Princeton University, is most recently the author of  “Debating Religious Liberty and Discrimination.”

He also wrote the book “When Harry Became Sally: Responding to the Transgender Moment,” is co-author of “What Is Marriage?: Man and Woman: A Defense,” and co-editor of “A Liberalism Safe for Catholicism? Perspectives From The Review of  Politics.”

The full text of Anderson’s speech is here.