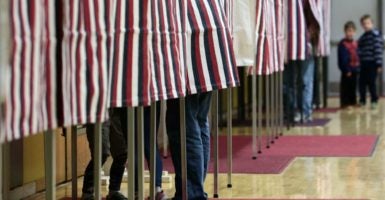 New Hampshire’s U.S. Senate race was decided by little more than 1,000 votes in November, while the spread between the top two presidential candidates was fewer than 3,000 votes.

While 458 potentially fraudulent votes aren’t enough to have changed the outcome of either race, the questionable votes prompted an investigation by the New Hampshire Attorney General’s Office and legislation to reform the state’s same-day voter registration.

“It’s not enough to change the result of the national level races, but it could impact state or local races that are often decided by just one vote,” New Hampshire Deputy Secretary of State David Scanlan told The Daily Signal.

Though New Hampshire is a small state, its House of Representatives has 400 members—the largest state legislative body in the United States.

While President Donald Trump and some other Republicans have said voter fraud occurred in last year’s elections, it wasn’t a conservative outlet that turned up inconsistencies in New Hampshire.

To register to vote with an out-of-state ID, a person must show documented evidence of living in New Hampshire. In lieu of that, voters may sign a legal document affirming their address, under penalty of prosecution if they lie. For confirmation, election officials send a letter to that address after the election.

The New Hampshire Secretary of State’s Office sent out a total of 6,033 letters to people who voted in New Hampshire without proof of a domicile in the state (including but not limited to same-day registrants), according to a follow-up report by NH1 News Network.

Of those, 458 letters came back as undeliverable. This is the evidence of potential voter fraud. New Hampshire has 984,920 registered voters.

In a phone interview with The Daily Signal, Scanlan said that after the letters came back as undeliverable, the office sent the matter to the state Attorney General’s Office for investigation as required by law.

“Just because these were undeliverable doesn’t mean they were illegal votes. We’re seeking further investigation to find out,” Scanlan said.

No update is available, New Hampshire Assistant Attorney General Brian Buonamano told The Daily Signal, and the office continues to review the information.

Attorney General Joseph Foster and Secretary of State William Gardner both are Democrats.

The legislation would require a same-day registrant to provide a document showing he or she lives or plans to live in New Hampshire for more than 30 days.

Documentation could include real estate contracts, leases, school enrollment forms, or utility service agreements. A false statement could lead to a fine of up to $5,000.

If passed, the bill would continue to allow people to vote without proof, but they would have to fill out an affidavit promising to provide proof within 10 days. This shifts some of the burden to the voter who lacked necessary ID, rather than local election officials who currently have to send the confirmation letter within 90 days of the election.

“The thrust of this bill does not change same-day voter registration,” state Sen. James Gray, R-Rochester, vice chairman of the Election Law and Internal Affairs Committee, told The Daily Signal. “This is about making sure folks who vote here do live here.”

Under the legislation, the local election supervisor would seek to verify a voter’s address. The official would first use available public documents. If the official is unable to verify the voter’s location, the official will remove the name from the voter rolls and send the matter for review by the Secretary of State’s Office.

Republicans control the state’s House of Representatives, and Gov. Chris Sununu also is a Republican, so the political climate favors the legislation. However, the bill faces opposition from national groups.

Busefink said the bill “proposes steep penalties and issues the threat of criminal investigations that can deter or intimidate voters—especially those who may not have physical proof of domicile because they recently moved—from registering and voting.”

“Those votes were cast and still count. That 458 [questionable votes] only reflects the addresses that were undeliverable, it doesn’t reflect the potential fake names that might have been provided,” Churchwell told The Daily Signal. “There could be more who gave a good address and name, it just wasn’t theirs. How many voters might have come from Massachusetts? We don’t know.”