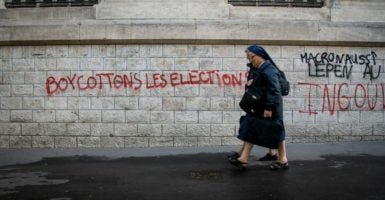 PARIS—As is the case most Sundays, Rue de Bac in central Paris was quiet this morning.

The shops were closed, as were most cafes on this day when self-styled centrist Emmanuel Macron would defeat the far-right candidate, Marine Le Pen, to become France’s next president.

Except for Le Saint Germain cafe, at the corner of Rue du Bac and Boulevard Saint-Germain. On the outdoor terrace, patrons sipped on coffee and munched leisurely on croissants, as is the custom on any morning.

Most were reading a newspaper. Two American tourists thumbed through a Lonely Planet guidebook; true to form, their voices a decibel level or two above the rest.

Inside, 58-year-old Marco was working behind the bar. Gray-haired with the sleeves of his white button-down shirt rolled up and a black apron tied around his soft waist, Marco served coffee and croissants to customers standing at the bar.

“Have you voted yet?” Marco asked an older man who wore a driving cap and was reading a copy of Le Figaro, a staple conservative French newspaper.

“No,” the man replied between sips of coffee. “And I don’t plan to.”

“I’m not going to vote because both candidates are no good,” Marco told The Daily Signal, asking that his last name not be used due to privacy concerns. “Neither one talks about the country. They only talk about their small problems; it’s only a quarrel between the two of them.” Outside the cafe, the sky was gray, the air cool and fresh, and the sidewalks still wet from spring showers the evening prior. “His resounding victory confirms that a very large majority of our fellow citizens have united around the values of the Republic and signaled their attachment to the European Union as well as the opening up of France to the world,” incumbent French President Francois Hollande said of Macron’s victory in a Sunday evening statement.

Yet, with his win, Macron faces a divided country with a litany of economic and security woes, including terrorism and high unemployment.

“Many will be breathing a sigh of relief with Macron’s win but while he is far more preferable than the anti-NATO, anti-American, and pro-Putin Le Pen, we should not kid ourselves into thinking that he represents the sort of change France so desperately needs,” Luke Coffey, director of the Douglas and Sarah Allison Center for Foreign Policy at The Heritage Foundation, told The Daily Signal.

“While Le Pen would have done great damage to France and its standing in the world, Macron’s stale economic policies mean that France will remain on economic life support for the foreseeable future,” Coffey said.

Sunday marked the tepid end of a historic French presidential campaign. For the first time in France’s Fifth Republic, the Socialists and Les Republicains, France’s establishment liberal and conservative political parties, respectively, were not represented in the second, final round of the presidential election.

Sunday’s vote highlighted an upheaval of France’s political order and a stark crossroads for France’s future due to the diametrically opposing political policies and philosophies of Macron and Le Pen.

However, for many French voters, both Macron and Le Pen were a disappointment. Le Pen was too extreme, and Macron was considered to be under the thumb of France’s banking elite.

“My favorite candidate was François Fillon,” Carmen Van Houten, a 52-year-old pediatric nurse at a public hospital told The Daily Signal, referring to the conservative Les Republicains candidate who lost in the April 23 first round of voting after a scandal-tainted campaign.

“The media decided for the French people that the new president would be Emmanuel Macron,” Van Houten said. “For one year now the media wanted to have a match between Macron and Le Pen. So today I’ll go to Fontainebleau Forest to run a trail. I’ll not go to vote.” By all accounts, the lack of enthusiasm generated by both candidates translated into historically low levels of voter participation. As of 8 p.m. in Paris, turnout was estimated to be roughly 75 percent—the lowest level of voter participation in a presidential second-round vote since 1969, according to French news reports.

Macron’s win was decisive. But with such low levels of participation, his mandate to govern might be weakened

“Macron will do nothing,” Marco said from Le Saint Germain cafe. “It will just be another five years of the same mistakes and failed policies of [French President Francois] Hollande. The rich will get richer, the poor poorer.”

“Divisions remain, but Emmanuel [Macron] will now have to address the most important concerns,” Nicolas Tenzer, founder and president of the Centre for Study and Research for Political Decision, a Paris-based think tank, told The Daily Signal.

“He will have to transform his victory into a presidential dynamic in the parliamentary elections,” Tenzer said. “The social issues are obviously the main ones, but it’s critical also to have a government with completely new political figures.”

‘Best of a Bad Situation’

Macron represented his own upstart political party, En Marche!–translating to “Let’s go!” or “forward!” in English–which he formed in April 2016 as a vessel for his maverick presidential campaign. He does not have the backing of a major political party in France’s National Assembly, which could make it hard for him to pass his agenda. Security measures at the foot of the Eiffel Tower on Sunday. (Photo: Nolan Peterson/The Daily Signal)

“We’re not celebrating, we’re not popping open the champagne,” Olivier Dartigolles, spokesman for the French Communist Party, said in a statement to the press on Sunday evening. “Millions of people must feel trapped. Emmanuel Macron was elected by default.”

Macron’s victory was, however, a landmark defeat for far-right, anti-immigration, anti-EU parties across Europe—as well as for the Kremlin’s machinations to fund and support those parties to weaken its perceived Western rivals.

“This was the best of a bad situation, but at least the only person more disappointed than Le Pen right now is Russian President Vladimir Putin,” Coffey said.

“It’s certainly a loss for Russia, and thus good news,” Tenzer said. “But no one can be reassured with the National Front catching 35 percent of the votes.”

The National Front, the party of Le Pen, is a controversial political force in France. Its founder, Jean-Marie Le Pen (Marine Le Pen’s estranged father), was notorious for his Nazi-sympathizing, anti-Semitic remarks—including his calling the Nazi gas chambers of the Holocaust a “detail” of history.

Yet, many French voters—35 percent of them—were willing to overlook the National Front’s checkered past and dubious ties to Moscow to upend France’s political and economic status quo.

“I’m for Le Pen,” Regis Aernouts, an antiques dealer in Paris’ Sixth Arrondissement told The Daily Signal on Saturday. “I’m not racist, but I think she would be best for the country. We live in a bubble here in Paris. It is, I think, like what happened in America when you elected Trump. People living in Washington and New York didn’t know what was happening in the rest of the country. It’s the same here in France.”

In Paris on Sunday, tourists passed through airport-style security barriers to approach the foot of the Eiffel Tower. Armed army fire teams, clad in body armor and with assault rifles slung across their chests, patrolled among the crowds. News teams from around the world were set up with the Eiffel Tower in the background as reporters rehearsed their stand-ups for election day reports.

Up the river at the Musée d’Orsay art museum, which contains works by Vincent van Gogh, Claude Monet, and Paul Cézanne, people waited for hours in a line that zigzagged around the block before it trickled through metal detectors and X-ray machines at the museum’s entrance.

This was a bellwether day for French democracy, and the fears of a terrorist attack were high.

On the Avenue des Champs-Élysées, a makeshift memorial stands at the spot where, on April 20, an Islamist militant killed French police officer Xavier Jugelé. Within a mound of collected flowers are handwritten notes, candles, and pictures of Jugelé. A memorial for French police officer Xavier Jugelé, who was killed by an Islamist militant on the Avenue des Champs-Élysées on April 20. (Photo: Nolan Peterson/The Daily Signal)

On this day, election day, the sidewalks of the Champs-Élysées were packed almost shoulder-to-shoulder with pedestrians. At the memorial at the site of Jugelé’s murder, a small group of passers-by paused to silently and reverently consider what had happened here a little more than two weeks ago. Meanwhile, as unaware tourists marched past, a bullet hole remained in a nearby light pole.

It reminded this correspondent of the top of Institutskaya Street in central Kyiv, Ukraine (now renamed Heroes of the Heavenly Hundred Street) where bullet holes remain in light poles from the 2014 revolution, evidence of when government snipers gunned down protesters in the waning days of deposed pro-Russian President Viktor Yanukovych’s regime. A bullet hole remains on a light pole on the Avenue des Champs-Élysées from an April 20 attack by an Islamist militant. (Photo: Nolan Peterson/The Daily Signal)

Scars of violence on the streets of Kyiv and Paris—reminders, in both places, of the thin veneer that separates civilization from chaos. A dividing line, which is growing thinner in capitals across Europe.

“France will remain divided after the election,” Marco said from Le Saint Germain cafe. “This election will change nothing.”