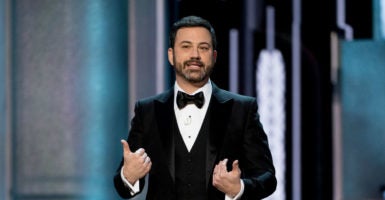 In his emotional monologue a few nights ago, Jimmy Kimmel told us a heartbreaking story with a happy ending.

His newborn son, Billy, was diagnosed with a heart disease and underwent immediate surgery—which thankfully was successful.

Millions have since watched and sympathized with the comedian and his family—crying when he cried, rejoicing when he rejoiced.

No one ever wants that diagnosis to be their story. It’s scary, especially when you consider that a solution comes in the form of open heart surgery on the tiniest of chest cavities.

Kimmel was right to praise the doctors and nurses at Cedars Sinai Hospital and the Children’s Hospital Los Angeles. They saved his son’s life.

The care, technology, and life saving treatment his family experienced was made possible by two, privately funded organizations. Both Cedars Sinai and Children’s Hospital LA are non-profit, not government-run, hospitals. This isn’t a coincidence.

When individuals are allowed to fund programs they like without a government mandate, we end up with more efficient and effective services. Hospitals are only one very important example.

As Kimmel’s story continues to affect hearts and minds in the ongoing health care debate, take this opportunity to talk to people about charitable giving vs. government funds. Here’s how we suggest you do it.

This is a delicate conversation to have because it seems like liberals and conservatives stand firmly on their own sides.

When conservatives talk about decreasing funding for a beloved and seemingly helpful program, liberals introduce us to a victim that will inevitably die, starve, and be denied a good education if funding is reduced or pulled.

We watched it happen when Mitt Romney talked about cutting funding for PBS. His desire to rein in spending obviously meant that conservatives hate Big Bird and want to deprive future generations of his joy.

We watched it happen when President Donald Trump released his budget, which would have cut funding for a grant program that supports Meals on Wheels. Now, anyone in favor of this cut is accused of wanting old people to starve.

Both claims are absurd, but the narrative is sticky.

This is bad news for an economy that’s nearing $20 trillion in debt. If spending cuts to programs that matter always translate to “you want to kill Big Bird?!” or “old people will starve!” then we will never have nice things. To avoid these accusations, you have to start with common ground.

Yes, we like Big Bird. Yes, we like Meals on Wheels. In fact, we like helping people in need through a wide variety of programs. WE ARE GOOD PEOPLE.

The only question we ask is: Who does it best—the government, or you?

In addition to the hospitals that served Kimmel’s family so well, here are a few examples that illustrate why and how charitable giving provides MORE help (more efficiently) than the government to those in need.

In the aftermath of Hurricane Katrina, we had a front row seat to FEMA vs. Habitat for Humanity. This “battle” to get Louisianans back on their feet after the hurricane is a perfect example of how private charity, not government funding, is a better problem solver.

FEMA failed miserably in its response, while Habitat for Humanity built homes for the homeless.

Government-funded programs will always be hamstrung by regulations and red tape, which is why private charity will always be more capable and efficient.

If we truly care for, and want to help, a vulnerable segment of the population (homeless, elderly, children, the displaced), shouldn’t we want to support programs that actually help? And stop funding programs that don’t?

It’s also not true to assume that if funding is pulled from a program like Meals on Wheels, that others won’t step in and donate, or that another organization won’t pop up to take its place.

Take for example the One Can A Week program.

Peter Norback took it upon himself to collect cans in his community for the local food bank. He has collected more than 62,000 pounds of food and $13,000 from one neighborhood.

His model has been so successful that similar organizations are taking root all over the country.

This is one man with one program. He had time, saw a need, and filled it—and he is not the only person to ever respond like this. He also won’t be the last.

The government doesn’t have to outline how and when that help happens, especially since the response is often slower and less comprehensive.

If you say the wrong word, you can lose this argument before it starts.

“Cut” and “defund” make big government lovers see red, so stick to “reduce waste.” Reform is always a good choice, and it accurately describes what you wish to do.

If the end goal is to help people, then you have to talk about people—who you’re helping, and how. Only then can you pivot to why private charity trumps government spending.

Americans are generous, and we shouldn’t be afraid to acknowledge it. Remind people that the most effective and efficient help comes from individuals who choose where, when, and how to allocate their money.

The hospitals that saved the life of Kimmel’s son wouldn’t be able to do what they do without private donations.