Despite the Rhetoric, US Trade Deficit With China Is Not a Big Problem. Here’s Why. 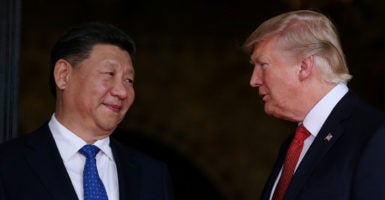 President Donald Trump discussed trade with Chinese President Xi Jinping during their April meeting in Florida, after the president had long complained about the U.S. trade deficit with China. (Photo: Carlos Barria/Reuters/Newscom)

When we discuss international trade and balance of payments, there are two types of accounts.

There is the current account, which includes goods and services imported and exported and receives the most political attention.

That made for a $309 billion current account deficit. In other words, we purchase more goods and services from Chinese producers than Chinese consumers purchase from American producers.

How much of a problem is it when there is a deficit, or a negative imbalance, on current accounts? Let’s look at it.

With just a bit of thought, one could come up with thousands of examples in which one party buys more from another than that party buys from it—creating deficits in current accounts.

But a current account deficit is always offset by a surplus somewhere else. That somewhere else is known as the capital, or financial, account.

In our capital account, the U.S. has a huge surplus with China. That means money is flowing into our country from China.

In other words, Chinese people are investing more money into the U.S.—in the forms of home and factory purchases, stocks, and bonds—than Americans are investing in China.

It turns out that foreigners own $30 trillion worth of U.S. assets, such as stocks, Treasury bonds, manufacturing plants, and real estate.

One of the reasons that foreigners hold so much U.S. capital is that our country is one of the world’s most attractive places to invest.

Secondly, our capital markets, unlike our goods markets, are open to foreigners. Foreigners can buy and sell any U.S. asset in any quantity, except in cases in which national security is an issue.

One of the troubling aspects of foreign confidence in America is that foreigners invest so much in U.S. Treasury bonds. That in turn gives the U.S. Congress greater latitude to engage in profligate spending.

What about President Donald Trump’s call to reduce our current account trade deficit?

By the way, we know that we’re being deceived when a politician talks only about the current account deficit, without a word about the capital account surplus.

But that’s fine with politicians. The beneficiaries of trade restrictions are visible. Tariffs on tires, clothing, and electronics will mean more profits and jobs and more votes for politicians.

The victims of trade restrictions, such as people in the real estate market and other areas where foreigners are investing, are less visible.

If trade deficits were something for a president to fret about, every U.S. president from 1790 to today ought to have been fretting. For most of our history, we have had current account deficits.

I should say every president except Herbert Hoover and Franklin D. Roosevelt, whose administrations ushered in the Great Depression. Nine out of the 10 years of the economic downturn of the 1930s, our nation had a current account trade surplus.

Should we reproduce the economic policies of that era and recreate the “wonderful” trade surplus?