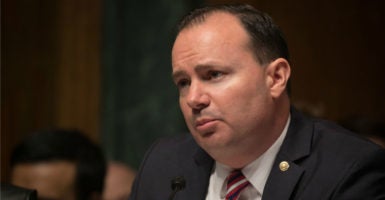 For eight years, U.S. foreign assistance was tied to a leftist political agenda rather than American interests, and it’s now up to President Donald Trump to correct that, Sen. Mike Lee said Tuesday.

“President Trump and his team must change the culture of American diplomacy,” @SenMikeLee says.

Lee took particular aim at U.S. support during the Obama administration for the overseas work of nonprofits bankrolled by liberal billionaire George Soros.

“Whatever one’s views about abortion, energy regulation, alternative family structures, they are neither core international priorities of the American people, nor essential to American national security. They are domestic political controversies, pet causes of a sort of privileged, globalist elite,” Lee said in the speech at The Heritage Foundation.

“Yet for eight years under President Obama’s administration, they were the substance of a global reeducation campaign, funded by … American taxpayers,” the Utah Republican said.

Lee made the remarks, in which he specifically criticized the U.S. Agency for International Development, or USAID, ahead of a panel discussion on U.S. foreign assistance at The Heritage Foundation.

“President Trump and his team must change the culture of American diplomacy towards one that prioritizes American interests and respects the sovereignty and self-determination of other peoples,” Lee said.

Trump’s fiscal year 2018 budget proposal would cut funding for the State Department and USAID by 28 percent.

The citizens of countries such as Macedonia, Poland, and Albania see the U.S. government spending money on progressive political causes as a “well-funded external political activism that undermines legitimate governments and long-held cultural norms of their nations with leftist policies and leftist politicians,” Lee said, adding:

And who can question their concerns, when the State Department and USAID have provided millions of American taxpayer dollars to organizations in Eastern Europe associated with well-known progressive advocates like George Soros and his Open Society Foundations, who make no secrets about the kinds of politics they support?

A current example of how this backfires can be seen taking place in Eastern Europe: https://t.co/q2N3N1qpMM https://t.co/XxsdFV8mJt

The mission of USAID, which has a $22.7 billion annual budget, is to fight poverty and promote democracy abroad.

A State Department spokesman told The Daily Signal in a written statement that USAID money is properly accounted for.

“USAID is committed to accountability and transparency and to the oversight of U.S. government funds to ensure they are not subject to waste, fraud, or abuse,” the spokesman said in an email. “USAID regularly conducts rigorous reviews and audits of programs implemented by partner organizations. These reviews are conducted to measure the programs’ effectiveness and efficiency and to ensure their compliance with applicable statutes, regulations, and policies.”

Macedonia today is embroiled in a governing crisis that has been brought about largely by external interference in domestic issues and political processes. The crisis has deepened the political divide in the country and threatens to inflame ethnic tensions.

Such unrest is like an engraved invitation to an opportunist like [Russian President] Vladimir Putin, who can inflame divisions and actively court populations who feel that they have been betrayed by the United States.

Senators may use "other means" to investigate the millions of tax dollars propping up billionaire George Soros' work https://t.co/T8RW3lmiFV pic.twitter.com/9cArM8AHoq

From 2012 through 2016, USAID gave $4.8 million to Foundation Open Society-Macedonia, a division of the Soros-funded nonprofit, “in partnership with four local civil society organizations,” according to the agency’s website.

The conservative government watchdog Judicial Watch has sued the State Department and USAID for detailed information about funding for Foundation Open Society-Macedonia.

Open Society Foundations spokesman Maxim Tucker disputed much of Lee’s comments about the Soros-funded groups in a statement to The Daily Signal. Tucker said in an email:

Senator Lee must know that since 1973, U.S. law prohibits USAID from funding groups that support abortion as a method of family planning–it’s simply false to suggest that the Open Society Foundations or its affiliated organizations use USAID funding to promote abortion rights abroad.

Indeed, we administer only a fraction of USAID funding and that money goes on to local organizations working on local issues–such as health care, infrastructure, education, community activism, and journalism. We do spend nearly a billion dollars of our own money each year funding a wide range of groups that promote human rights, democracy, and good governance.

In central and Eastern Europe, these groups are increasingly attacked or smeared by corrupt and authoritarian governments seeking to deflect legitimate criticism of their leadership.

“The department’s initial response was dismissive of our concerns, and refused to promise any such review,” Lee said during his remarks Tuesday, which may be seen in their entirety here:

“The immediate priority for the Trump administration is to get the right appointees into key positions at the State Department and USAID,” Lee said later, adding:

President Trump, Secretary Tillerson, and other administration officials must also clarify the position of the United States on a number of foreign policy issues, especially in areas where the Obama administration left a damaging impact or caused confusion about U.S. priorities.

USAID doesn’t have a presence in Ireland, for example, according to James Walsh, a former member of Ireland’s senate. Walsh spoke at Heritage’s forum about how the State Department has backed progressive causes in Ireland, including abortion and same-sex marriage.

Walsh said “the most prominent support for so-called progressive causes” has come from U.S.-based nonprofits.

However, Walsh said, the U.S. Embassy in Dublin provided financial help to set up the LGBT group Shout Out. He said that group had “a very prominent role” in Ireland’s 2015 referendum that legalized same-sex marriage.

The known support from the official U.S. government sources may be relatively modest, but it contributes greatly to an impression which the rhetoric of the Obama administration strongly underlined. And that is that the U.S. government is actively and vigorously promoting these euphemistically called progressive causes around the world and is prepared to interfere in what many people would regard as a matter exclusively for the domain of the people of that particular country.

The State Department did not have an immediate answer for The Daily Signal  about whether the embassy financially supported the new lesbian, gay, bisexual, and transgender group in Ireland.