First Round of French Presidential Election a Blow to the Establishment 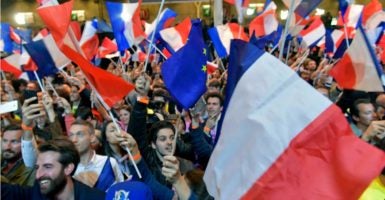 French presidential candidates Marine Le Pen and Emmanuel Macron will face off in the second runoff round of elections on May 7. (Photo: Photo PQR/Ouest France/MAXPPP)

France held a presidential election Sunday under the looming threat of Islamist terrorism, and winnowed the field to two candidates at opposite ends of what has become the new ideological battle line of our era: nationalism vs. globalism, for lack of better terms.

One candidate, Marine Le Pen, hails from the pitchfork end of European blood-and-soil nationalism. The other candidate, Emmanuel Macron, is a We-Are-The-World internationalist cut in the mold of Barack Obama and Justin Trudeau.

According to initial results, Macron won 23.7 percent of the vote, while Le Pen won 21.7 percent in what was the first round of this election. They will face off in the second runoff round of elections on May 7. None of the other nine candidates running Sunday got above 20 percent support. Le Pen wants to end immigration to France, saying the country is full.

Macron is heavily favored to win in the second round, though. Of course, polls have been wrong in the past.

The two are archetypes of the new global struggle that has replaced the old left-right paradigm. Their reactions to a terrorist attack on Thursday on France’s main boulevard, the Champs Elysees, for which ISIS claimed responsibility, epitomized their outlooks.

Following the attack, Macron wondered on French Radio whether terrorism is a new normal to which the French must become accustomed.

“This threat, this imponderable problem, is part of our daily lives for the years to come,” Macron said.

Le Pen said she would deport everyone on the terror watch list, even those born in France, shut down all Islamist mosques, and close French borders.

Le Pen leads the far-right National Front, founded by her father, Jean-Marie Le Pen, whom she ousted as leader to “de-demonize” the party after years of anti-Semitic and racist statements by him. Macron founded his own movement, En Marche!, after serving as economy minister for the current Socialist president, Francois Hollande.

Their victory amounted to a complete collapse of the two parties that have mostly alternated in power since Gen. Charles de Gaulle created France’s Fifth Republic in 1958, the right-of-center Gaullists and the leftist Socialists. The only exception to this two-party system was the election of centrist President Valerie Giscard d’Estaing in the 1970s.

Because Macron and Le Pen come from parties without large political bases, it is unlikely that either will benefit from a legislative majority that will emerge after elections on June 11 and 18. Macron, however, is widely expected to be able to cobble together a supportive coalition should he win the presidential election in May.

There’s no question that Le Pen’s suite of policies and stances fit much better with President Donald Trump’s outlook. Trump predicted two days ago that she would benefit from the terrorist attack.

Le Pen, 48, wants to pull France out of the “Schengen Area” of 26 European countries that have dissolved external borders, and out of the European Union’s common currency, the euro.

But she is also close to Russian President Vladimir Putin, from whom the Trump administration is now trying to put some distance. Le Pen said she would consider lifting economic sanctions on Russia if elected. Her campaign has benefited from Russian bank loans and the support of Putin’s vast propaganda empire.

Macron, 39, is the candidate that best fits the style of Angela Merkel, Germany’s powerful chancellor. Of the 11 candidates who ran on Sunday, Macron most closely echoes Merkel’s staunch support for a strong and expanding European Union, her pro-immigration policies, and her desire to keep in place economic sanctions on Russia. His promises to introduce economic reforms also please Berlin. Merkel’s aversion to Le Pen is so strong—and so richly reciprocated—that The Economist remarked on Sunday, using the name of the German foreign ministry, that “There is no file sitting in a locked drawer somewhere in the Auswärtiges Amt with contingency plans for a Le Pen win.”

Despite their differences, Le Pen and Macron have distinct similarities. They are both big government types.

Le Pen is a champion of public services, would tax companies that outsource manufacturing, and would not touch France’s economically nefarious 35-hour workweek. She also refuses to cut down France’s bloated civil servant rolls.

Macron says he wants “flexibility” for young Frenchmen when it comes to the workweek. But he can see reducing the workweek for people above 50 to 32 hours or even 30 hours. “Why not?” he asks.

Macron also wants to spend an additional 50 billion euros during the upcoming five-year presidential term. He wants a eurozone budget and finance minister. He would not raise France’s low retirement age of 62, but at least he would not lower it even further to 60, which is what Le Pen promises to do.

And there’s no question that in choosing these two candidates, French voters have snubbed the political establishment. If the election of Trump was American voters throwing a brick through the window of the East Coast establishment, this was the French voters hurling a Molotov Cocktail into the still smoke-filled rooms of France’s political class.