This May Be Venezuela’s Tiananmen Square Moment 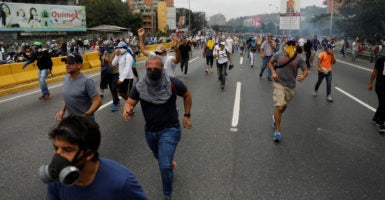 Opposition supporters clashed with riot police on Thursday while rallying against Venezuelan President Nicolas Maduro, who has tried to consolidate power to himself amid an ongoing economic collapse. (Photo: Carlos Garcia Rawlins/Reuters/Newscom)

Venezuela is no stranger to protests, but the recent uprisings have rocked the country and stirred questions about the nation’s future.

This past week, the “mother of all protests” has seen upward of 2 million Venezuelans take to the streets demanding an end to the notoriously corrupt Maduro regime.

Beginning on what would be the 207th anniversary of the country’s independence from Spain, frustrated Venezuelans have taken to the streets demanding change. So far, three Venezuelans have been killed in the marches, hundreds have been injured, and 500 have been arrested.

In the span of just over 20 years, President Nicolás Maduro, his predecessor Hugo Chavez, and their “Socialism of the 21st Century” have singlehandedly destroyed a country sitting atop of the world’s largest oil reserves.

The ongoing economic crisis has bankrupted the country, and the International Monetary Fund forecasts that by midyear the inflation rate will hit 1,600 percent. The oil industry, which brings in 95 percent of the country’s export earnings, is bottoming out.

While the nation is home to massive oil reserves, production is at its lowest level in over 20 years. Adding to the financial ruin is the Central Bank’s historically low cash reserves, which stand at 10.4 billion bolívars fuerte—7.2 billion of which is owed in outstanding debt obligations

Nowhere is the evidence of Venezuela’s unraveling more evident than the country’s health care system.

Venezuela’s Pharmaceutical Federation estimates a shortage of 85 percent of common drugs and medical supplies. Infectious diseases once kept under control have surged.

Cases of diphtheria and malaria are re-emerging, and the number of Zika infections is estimated to be “nearly 700,000,” according to a Venezuelan health organization.

While leader Maduro is widely unpopular, he has managed to stay in office by unlawfully consolidating power.

Any doubt about the Maduro regime’s determination to keep power disappeared last month when he ordered the Supreme Court to take over the National Assembly—the last remaining government branch outside of executive control.

That decision proved to be short-lived, as the court returned the legislative powers a few days later after widespread protests. But despite regaining legislative control, Venezuela’s beleaguered opposition is in a difficult place to fight back. A woman blocks the police during a march in Caracas against Venezuelan President Nicolas Maduro. (Photo: Manaure Quintero/Zuma Press/Newscom)

Currently, Venezuela has over 100 political prisoners, more than even Cuba. For the past three years, opposition leader and former government official Leopoldo Lopez has been kept in a military prison in inhumane conditions.

Another victim of the regime is Francisco Marquez, a dual U.S.-Venezuelan citizen. For four months, he was tortured by his guards and the secret police.

After almost two decades of buildup to this catastrophe, Latin American leaders are stepping forward to address the Venezuela problem.

In particular, the new leader of the Organization of American States, Secretary-General Luis Almagro, has re-engaged his organization as a force for democracy and human rights in the hemisphere. But could it be too late?

Only time will well. One thing is for certain—these protests appear to be intensifying, and by all counts the Venezuelan government is continuing its violent repression.

It is no longer a matter of how long the government can hold on to power, but how the multitude of problems facing Venezuela will shape its inevitable implosion.