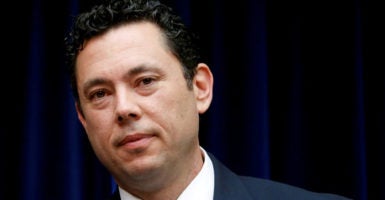 Rep. Jason Chaffetz, R-Utah, says he will not run for re-election next year. Chaffetz is chairman of the House Oversight and Government Reform Committee. (Photo: Gary Cameron/Reuters /Newscom)

Chaffetz has been more visible than most colleagues as chairman since 2015 of the House Oversight and Government Reform Committee, a post considered critical for government transparency and accountability.

“Thank you for allowing me to serve as your representative in the United States House of Representatives,” Chaffetz, who joined Congress in 2009, said in a Facebook post Wednesday morning. “After long consultation with my family and prayerful consideration, I have decided I will not be a candidate for any office in 2018.”

The position of chairman of the House oversight committee is important to conservatives because the panel performs a key function, said Rachel Bovard, director of policy services at The Heritage Foundation and a former Senate aide.

“Otherwise, how do you hold [bureaucrats] accountable to what the voters intended?” she said.

During his chairmanship, Chaffetz investigated former Secretary of State Hillary Clinton for her use of a private email account and server while conducting State Department business.

Among those wishing Chaffetz well was Rep. Jim Jordan, R-Ohio, a member of the committee whose name has been floated as a possible successor as chairman, according to The Huffington Post.

While Chaffetz, 50, indicated that he decided not to run for a sixth term for reasons pertaining to his family, political observers quickly speculated that his decision not to run again comes from a desire to avoid “policing his own party” now that Republicans control both Congress and the White House, as McKay Coppins reported in The Atlantic.

Should Chaffetz have sought to keep the chairmanship, he could have done so for six years, as he told Coppins in a recent interview.

In an interview on Fox News, Chaffetz threw water on rumors that he wanted to run for the seat of Sen. Orrin Hatch, R-Utah, or for Utah governor in 2020. Hatch told CNN last month that he will seek another term next year rather than retire.

“I think if I wanted to run, I would be very competitive,” Chaffetz said Wednesday afternoon in an interview with Neil Cavuto on Fox News.

“I want to go back to the private sector,” he said. “I want to reintroduce myself to my family.”

Before running for Congress, Chaffetz worked for politician and diplomat Jon Huntsman Jr. in 2004 as campaign manager in Huntsman’s successful race for Utah governor, then as chief of staff after Huntsman took office. He later started a corporate communications and marketing firm.

Possible successors to Chaffetz as House oversight chairman other than Jordan include Reps. Michael Turner, R-Ohio, and Jimmy Duncan, R-Tenn.

Whoever takes over the role will have a key responsibility, Bovard said.

“The very nature of bureaucracy is to cut corners and is to innocently get off track,” Bovard said. “The congressional role of oversight … is sort of like that link of accountability between the voters and the executive branch.”