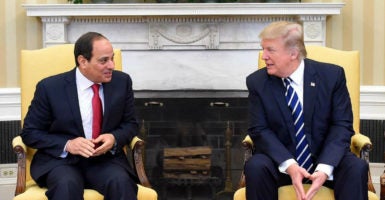 Given the turmoil of the last few days, it’s fortunate that the presidents of Egypt and the U.S. have begun to reforge the strategic partnership that unraveled under President Barack Obama.

The horrific attacks on Christian churches in Egypt, a declaration of emergency rule, and Syrian President Bashar al-Assad’s gas attack on innocent civilians have set a tense region further on edge. Bringing a measure of stability back is going to require the two leaders to work together.

It’s not surprising that Presidents Donald Trump and Abdel Fattah el-Sisi hit it off without even a round of golf. The two see the world in much the same way.

Both believe the Islamist threat from terrorists and subversive political movements is the top menace to regional stability. Both worry that unsettled states such as Libya, Somalia, Syria, and Yemen will serve as hotbeds for terrorist activity.

Both are intolerant of state-sponsored terrorism as foreign policy as practiced by states such as Iran. Both find Russia’s meddling in the Middle East unhelpful. Both would like to see the Israel-Palestinian peace process get back on track.

So it’s hardly surprising that Sisi said Trump has a “true understanding” of the region.

Unquestionably, what appeared to excite Sisi the most was Trump’s intent to roll back Obama’s policy of disengaging from the Middle East.

The Egyptian president (and virtually every other foreign official from that part of the world) has carried the same message to Washington. They want America back. They all seem to be getting the answer. Yes, playtime is over.

Further, Trump looks to be setting a course that walks a line between Obama’s indifference and the Bush strategy of taking the task of remaking the region into America’s own hands. That middle course strategy is resonating with Middle East leaders.

Overall, it looks like Trump’s strategy comes in two parts. One is helping stamp out Islamist extremism. The second piece is rolling back Iran by backing up a string of Sunni states paired with Israel as a buttress against Tehran’s expansionist threat to the peace and stability of that part of the world.

This strategy will also solve the problem of Russia. Russian President Vladimir Putin doesn’t have the muscle to be a major Middle East power broker. Moscow was opportunistically filling in the space vacated by Washington. If Trump steps, he’ll crowd Putin out.

Underneath the two big jobs is a basket of crucial supporting tasks, including stabilizing refugee populations in the region, rusticating the peace process, settling unstable states such as Libya, and promoting economic growth and more robust civil societies.

Sisi’s message to Trump was not that none of these problems will be fixed in a New York minute, but that it was urgent for the U.S. to start now and be engaged for the long term.

That was sound advice. There are no good fixes for any of the big problems in the region. That starts with Egypt itself, which remains a poor economic performer, ranking 144 on the Index of Economic Freedom.

Likewise, Egypt’s civil society has suffered a number of body blows from years of political turmoil. They also have to be addressed.

But having a peaceful and stable region is a vital American interest, and with judicious engagement and proactive policies, the U.S. can help achieve that end.

Further, there are more than 2 billion Muslims in the Middle East. A successful U.S. policy will make life better for all of them.

Note: This article was originally published by Fox News.