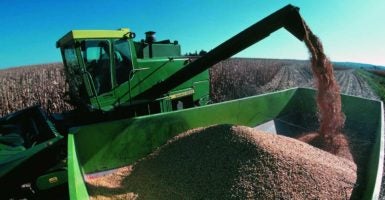 Fifteen organizations, including Heritage Action for America, have joined forces in a letter to members of Congress to combat “excessive federal government intervention” in the farming and ranching industries.

The Agricultural Act of 2014, frequently called the “the farm bill,” is set to expire in September of 2018.

With renewal talks already underway, the coalition has outlined three principles that it hopes will be evident in the next farm bill:

According to the Michigan State University Extension, the farm bill currently funds:

The coalition critical of the bill, which also includes Americans for Prosperity, FreedomWorks, and the National Center for Public Policy Research, among others, support fewer regulations and restrictions for farming, writing that farmers “are more than capable of competing in the marketplace.”

However, some oppose making cuts to the farm bill. Sen. Debbie Stabenow, D-Mich., ranking member of the Senate Committee on Agriculture, Nutrition, and Forestry, said in a prepared statement at a Kansas farm field hearing in February that “more than 500 groups—from every part of the farm and food sector—came together to reject calls for additional cuts to farm bill programs including crop insurance, nutrition, and conservation.”

Nonetheless, the signers say they hope to restore economic freedom to farmers and ranchers, writing in the letter, “We believe that it is long overdue to place faith in American farmers and treat them with the respect they deserve as sophisticated and innovative business leaders.”