Peggy Noonan, Who Explored Why Trump Appeals to Americans, Wins Pulitzer for Commentary 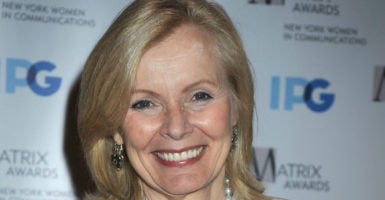 Peggy Noonan, pictured here in April 2012 at the Waldorf Astoria Hotel in New York City, is the winner of the 2017 Pulitzer Prize for distinguished commentary. (Photo: Robin Platzer/LFI /Photoshot/Newscom)

In a rare acknowledgement of conservative journalists by the most powerful arbiter of serious journalism, political commentator and columnist Peggy Noonan on Monday won a Pulitzer Prize for her columns for The Wall Street Journal on the 2016 presidential campaign.

Awarding her the 2017 Pulitzer Prize for distinguished commentary, judges said Noonan earned it for “rising to the moment with beautifully rendered columns that connected readers to the shared virtues of Americans during one of the nation’s most divisive political campaigns.”

She won one of 14 prizes for journalism announced Monday afternoon.

The Pulitzer judges recognized Noonan’s graceful but grounded work—she tends to write as if passing along personal, first-person musings on what she has observed or friends have said—in 10 columns published between Feb. 27 and Dec. 31, 2016.

In the first entry, she writes of the divide between two classes—the “protected” and the “unprotected”—and the dissatisfaction among the latter, ordinary Americans, that powered Donald Trump’s campaign:

Many Americans suffered from illegal immigration—its impact on labor markets, financial costs, crime, the sense that the rule of law was collapsing. But the protected did fine—more workers at lower wages. No effect of illegal immigration was likely to hurt them personally.

The unprotected came to think they owed the establishment—another word for the protected—nothing, no particular loyalty, no old allegiance.

Mr. Trump came from that.

The Journal also was home to three of the four other conservative commentators to win the Pulitzer in the past 30 years: Brett Stephens in 2013, Dorothy Rabinowitz in 2001, and Paul Gigot in 2000. Conservative columnist Charles Krauthammer of The Washington Post won the prize in 1987.

Noonan would be sharply critical of Trump during the campaign, but saw early that he not only could win the nomination but also the general election against Hillary Clinton. Still, his flaws would doom his candidacy, she concluded.

By late Monday night, Noonan was thanking readers who congratulated her on Twitter:

:)) that is my rendering of a grateful smile. https://t.co/fqNdaB6yvC

Although her columns and commentary sometimes have been kinder to more centrist or even liberal Republicans such as John McCain and George W. Bush than to conservatives such as Sarah Palin or Ted Cruz, many conservative Americans still claim Noonan, 66, as one of their own.

This is perhaps because she continued to hold up the example of one of her greatest political heroes, Ronald Reagan.

Noonan, who first drew national attention as a speechwriter and special assistant to President Reagan from 1984 to 1986, has written a weekly column for The Journal since 2000. Peggy Noonan has a sweet moment with her former boss, President Ronald Reagan, in 1988. (Photo: The White House)

The Brooklyn native also is the author of nine books, five of them best-sellers, beginning with 1990’s “What I Saw at the Revolution: A Political Life in the Reagan Era,” through 2015’s “The Time of Our Lives: Collected Writings.”

While writing speeches for Vice President George H.W. Bush (she was chief speechwriter for his successful campaign to succeed Reagan as president), Noonan coined the phrases “a kinder, gentler nation” and “a thousand points of light.” She also came up with “Read my lips: No new taxes”—a memorable pledge (and play on Clint Eastwood) that came back to haunt Bush.

Noonan’s nominated columns may be read here. In a column published Nov. 26, less than three weeks after Trump defeated Clinton, she warned that the incoming president’s reputation as a garrulous dealmaker needed to undergo a transformation so that he is seen as patriot above all.

Mr. Trump shocked them by winning. He should shock them now with rectitude.