What Could Be Next for Susan Rice in ‘Unmasking’ Controversy 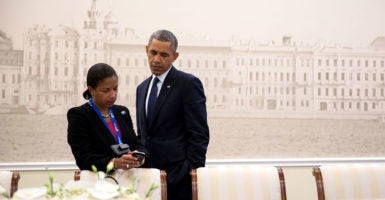 That prospect arose after news reports that Rice sought the identities of persons close to President Donald Trump whose communications were captured after the election in surveillance of foreigners by U.S. spy agencies.

Intelligence and national security experts say that it’s both legal and normal for someone in Rice’s position to ask to see the names of Americans whose communications are captured incidentally in surveillance of foreigners.

But intelligence committees in the House and Senate could look into whether Rice misused and spread information about Trump officials or associates once she learned their identities. The panels also could assess her motivation for seeking details about the incoming president’s conversations with foreigners.

“In the course of doing her national security adviser job, Susan Rice is within her full right to request the unmasking of NSA-collected information or FBI-collected information,” David Shedd, an acting director of the Defense Intelligence Agency under Obama who also served in the George W. Bush administration, said in an interview with The Daily Signal.

“The question becomes what does she do with that information once she knew it, rather than did she have the right to ask and did she actually do it,” added Shedd, who is now a visiting fellow at The Heritage Foundation. “I would absolutely put that question front and center now as a target of investigations.”

The Wall Street Journal reported that the House intelligence committee wants Rice, national security adviser to Obama in his second term, to testify as part of its probe into Russia’s meddling in the U.S. election and whether there was any coordination between the Trump campaign and Moscow.

Sen. Richard Burr, R-N.C., chairman of the Senate Select Committee on Intelligence, said Tuesday that he could be interested in interviewing Rice as well.

“If there is intelligence that leads to a reason for us to look at Susan Rice, then we’ll do it,” Burr told reporters.

Trump, meanwhile, told The New York Times that he thinks Rice may have committed a crime. The president did not provide evidence for his claim.

“I think it’s going to be the biggest story,” Trump told The Times in an interview Wednesday.

Rep. Adam Schiff of California, the ranking Democrat on the House Permanent Select Committee on Intelligence, criticized Republicans for focusing on Rice. Schiff said the issue is a diversion from the question of whether Trump campaign officials colluded with Russia in its election interference.

In an interview Tuesday with MSNBC, Rice denied doing anything improper, saying that it is “absolutely false” to suggest she sought to unmask the names of Trump campaign officials for political reasons.

Rice also denied leaking the information to anyone without the security clearances required to view classified intelligence reports, which would be a crime.

“I leaked nothing to nobody, never had, never would,” Rice told MSNBC’s Andrea Mitchell. “The notion, which some people are trying to suggest, that by asking for the identity of an American person, that is the same as leaking it, is completely false.”

Americans whose communications are incidentally captured—meaning somebody else was the target—in surveillance of foreigners generally are not named in intelligence reports unless there is a specific request to reveal their identities.

Under Section 702 of the Foreign Intelligence Surveillance Act, or FISA, intelligence agencies frequently monitor the conversations of foreigners—including officials with allied or hostile countries.

But the surveillance inevitably sometimes captures communications related to Americans who may be participating in the intercepted conversation or being spoken about.

To address concerns over Americans’ privacy, the law requires the government to use “minimization rules” that mask the identity of Americans—replacing the name with a generic description such as “U.S. Person 1.”

But there are exceptions. Certain government officials such as Rice may request names to be revealed to help them understand the intelligence reports.

The intelligence agencies decide whether to grant the requests, which are tracked and archived.

National Security Agency Director Michael Rogers, in testimony before the House intelligence committee last month, said 20 people at NSA have the authority to grant a request.

FBI Director James Comey, in the same hearing, would not say how many in his agency have that power. Comey did say the number is “surely” more than at the NSA, because FBI agents “come into contact” with U.S. citizens more often.

Experts say the standard required to ask for a name to be unmasked is easy to meet, meaning it’s unlikely Rice did not follow the rules if intelligence officials ultimately granted her requests.

“The standard is whether the U.S. person’s identity is needed to understand the importance of foreign intelligence information,” Adam Klein, a senior fellow with the Center for a New American Security, told The Daily Signal.

In an email, Klein said:

There’s a certain amount of subjectivity built into that, which means that the intelligence committees will likely want to look at how the standard was applied in these cases: What was the intelligence need for each unmasking request? How frequent were the requests, and was there a pattern? The answers to those questions will be informative for determining whether there’s cause for concern here.

Shedd, who had the authority to ask for Americans’ names to be unmasked when he held positions on the National Security Council, contends that it’s unlikely intelligence officials would reject a request to unmask an identity from a person in authority such as Rice.

“The predicate for unmasking is, ‘Does it have a national security concern?’” Shedd said. “I can drive a Mack truck through that. If I am Rice, I can make a case I need that name.”

Patrick Eddington, a former CIA analyst who is now a policy analyst in homeland security and civil liberties at the Cato Institute, said it’s impossible to say whether Rice and intelligence officials properly followed procedures without knowing more about the conversations that Trump or his campaign and transition teams may have engaged in.

“So far, all we have is Rice acknowledging she did ask for some specific U.S. person data in some intelligence report,” Eddington said in an interview with The Daily Signal. “We don’t have remotely enough detail on what the report was about, and why she wanted to have information unmasked.”

Eddington says the House and Senate intelligence committees will want to know more about the timing of Rice’s requests, and if she indeed sought the names of Trump campaign or transition officials in the waning days of the Obama administration.

“Rice is not a law enforcement official,” Eddington said. “If she is making these requests as she is heading out the door, it does raise questions that require a deeper examination.”