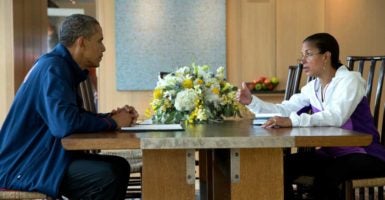 After Bloomberg reported that Susan Rice attempted to unmask identities of President Donald Trump’s associates for their involvement with foreign states, several Republican lawmakers were quick to speak out against the former Obama national security adviser.

Sen. Rand Paul, R-Ky., said, according to The Daily Caller News Foundation, that Rice should “testify under oath” for her involvement in trying to exposing Trump associates, as their names appeared in raw intelligence reports collected by U.S. intelligence operations.

“If [unmasking] is allowed, we shouldn’t be allowing it, but I don’t think [we] should just discount how big a deal it is that Susan Rice was looking at these,” Paul said to reporters on Monday.

“And she needs to be asked, ‘Did President Obama ask her to do this? Was this a directive from President Obama?’” Paul added, according to The Daily Caller News Foundation.

Sen. Lindsey Graham, R-S.C., said on Fox News that he plans on looking into Rice’s actions to discover if she intentionally mishandled classified material for political purposes.

Graham continued by saying that legislators must “get to the bottom of” Rice’s involvement and understand her past of “political manipulation of national security information.” This is presumably a reference to Rice’s past claim that the 2012 Benghazi terrorist attack was a spontaneous event triggered by a YouTube video, rather than a premeditated one.

“She’s done it in the past. Whether or not she did it this time, I don’t know, but it’s something Congress should look into,” he added.

While Graham prefaced by saying he would not “prejudge” Rice, he did note that Americans deserve to know if Obama’s national security adviser was “involved in unmasking Trump transition figures for political purposes.”

“Congress needs to get to the bottom of this and the FBI should be investigating whether any laws were broken,” DeSantis said, according to the Washington Examiner.

DeSantis, like Graham, cited Rice’s “history of deceit” as a reason why this story is especially noteworthy.

“That Obama national security adviser Susan Rice is alleged to have been responsible for this unmasking is troubling given her history of deceit and her close relationship with then-President Obama,” DeSantis said.

“We need to know whether the material gleaned from the Rice unmasking is the material fed to the media in an attempt to do political damage to the Trump administration and, if so, who was responsible for leaking it,” he added.

“This is the only thing the press should be talking about for the next month,” she added.