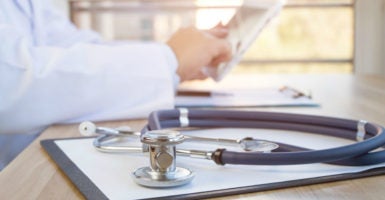 The heavy regulations in Obamacare were responsible for driving up premiums by up to 68 percent, according to analysis from Milliman. (Photo: iStock Photos)

For more than six years, I’ve made finding a way to make health care more affordable for Utahns my top priority as a United States senator.

Unfortunately, the American Health Care Act, which the House of Representatives rejected last week, would have failed to reduce health care premiums for Utahns. That is why I urged my House colleagues to vote against it.

But that is also why I am more committed than ever to finding legislation that can pass both the House and Senate and reduce health care costs.

The heart of the problem is the Washington-created, one-size-fits-all regulations that treat Utah’s unique population the same as that of Florida or Massachusetts.

Each of our 50 states has different populations with different health care needs. There is no reason we should all be forced to buy the same “essential health benefits” package when we shop for health insurance.

What is essential to one family or individual may not be essential to another. That is a decision for our diverse states, communities, and families to make, not bureaucrats and politicians in Washington.

As Americans, we should also be free to pay for the amount of health care we want, when we want it.

If your family wants a high-deductible health care plan that would only cover big emergencies, you should be able to buy that plan. And if you want a more expensive plan that covers every trip you make to the doctor, you should be free to purchase that plan, too.

If we could repeal these and other Obamacare regulations, we could significantly drive down the health care insurance premiums Utahns are forced to pay every month.

According to actuarial experts at the Milliman consulting firm, Americans are paying between 44.5 and 68 percent more in premiums due to Obamacare’s federal insurance regulations.

>>>Obamacare Regulations Drove Up Premium Costs by Up to 68%

The worst thing Congress could do is abandon health care reform entirely. We’ve come too far and we were too close to a deal to give up now—especially after we devoted just 17 legislative days to debating the Republican Obamacare repeal and replace plan.

If we want to get this policy right—and we owe it to the country to try—then it would be a dereliction of duty to give up on health care reform after just over two weeks of trying.

Americans, including many Utahns, are suffering every day under the dysfunction of our federal health care system and it would be cold-hearted to turn our backs on this issue.

In just the past year, the number of health insurance plans being offered in Utah has dropped from four to three. Twenty out of 29 counties only have one health insurance provider. Premiums have risen by 30 percent.

I’ve talked to countless Utahns who’ve been forced—literally forced—to pay more in health insurance premiums each month than they pay for the monthly mortgage payment that puts a roof over their heads.

These people are why I am still fighting to fix your health care. They need help now. And they deserve more than a two-and-a-half-week effort.