Freedom Caucus Is an Ally, Not an Enemy in Draining the Swamp 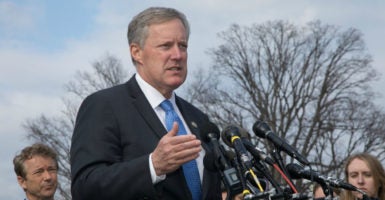 President Donald Trump’s tweet that it’s the House Freedom Caucus that “we must fight” shows there may be a little confusion about what “draining the swamp” means or, at the very least, what it looks like.

The Freedom Caucus will hurt the entire Republican agenda if they don’t get on the team, & fast. We must fight them, & Dems, in 2018!

I thought draining the swamp meant changing the culture not just in Washington, but of Washington. I thought it meant putting an end to business as usual, making deals behind closed doors, and the mentality that Washington knows best.

I thought it meant politicians would start doing what they promised voters they would do.

I truly thought that lawmakers fresh from the 2016 election, in particular Republicans, would do their due diligence in draining the swamp by getting rid of the government regulations and mandates forced on individuals and businesses in an effort to run more and more of our lives.

But, perhaps I was wrong.

Because if that is what draining the swamp looks like, then the House Freedom Caucus should be considered a loyal and reliable ally in that battle, not the enemy. It is a part of the solution, not the problem.

Republicans in Congress and running for Congress promised for seven years to repeal Obamacare. Candidate Trump changed the mantra to “repeal and replace.”

The best strategy to do both would have been to repeal Obamacare first, as Republicans had agreed on before, and then debate in an open process the new reforms (the replace parts) that would improve our health care system from where it was even before Obamacare became the law of the land.

There was precedent for doing it this way. In early 2016, then-President Barack Obama vetoed a bill that repealed Obamacare—a bill overwhelmingly supported by the Republican-led House and Senate.

Sen. Rand Paul, R-Ky., and Rep. Jim Jordan, R-Ohio, the former Freedom Caucus chairman, reintroduced this bill and encouraged GOP leaders to use it instead.

From that moment in mid-February, it was clear where House conservatives stood on the matter of replacing Obamacare.

But congressional GOP leadership, perhaps at the urging of the White House, decided they wanted to do it differently.

OK, fine. But the way they went about doing it was to pull out the old Washington playbook.

Draft the bill behind closed doors first. Then hold hearings on a compressed (and, frankly, artificial) timeline so that lawmakers are allowed little opportunity to read and understand the bill, offer amendments or debate, discuss and work out compromises among their colleagues.

And lawmakers certainly won’t have time to have a conversation with their constituents about how the bill will affect them and get their feedback.

When all was said and done, the bill was more replace than repeal.

Yes, it capped federal Medicaid spending. Good. However, though Obamacare had expanded it, Medicaid was not a new program. So, that was more “reform” than “repeal.”

But new federal regulations, such as the essential benefits and preventative care mandates, which made up the architecture and web of Obamacare and were the primary drivers of higher premiums, were left in place. At the end of the day, the legislation did not repeal the parts of Obamacare that had expanded the role of government in its takeover of the private health care market.

Here’s what you’re not hearing from GOP leadership or the White House: Freedom Caucus members wanted to get to “yes”—even more than their centrist Republican colleagues. Conservatives were even willing to swallow some of the bad policy in the American Health Care Act.

But neither GOP leadership nor the White House would budge on the disastrous Obamacare regulations that are driving up your premiums.

And that is Washington as usual. It’s OK to tinker with the financing of government programs as long as the government remains in control of said programs—in this case, in control of what makes up private insurance plans.

And that is why those who support draining the swamp should be thankful the House Freedom Caucus played a role in stopping what Republican Kentucky Congressman Thomas Massie labeled #SwampCare.

.@realDonaldTrump it’s a swamp not a hot tub. We both came here to drain it. #SwampCare polls 17%. Sad! https://t.co/4kjygV2tdS

Even now, as Freedom Caucus members try to collaborate with centrist Republicans, they’re getting unfairly blamed by Speaker Paul Ryan and Trump. In fact, one of Trump’s closest House allies, Rep. Chris Collins of New York, had this advice about working with the Freedom Caucus: “If that call comes in just hang up.”

GOP centrists seem to be following that advice. After a productive meeting between six centrists and six conservatives earlier this week, the centrists abruptly canceled a follow-up discussion.

We also know that at least 17 centrist Republicans were on the record in opposition of the bill. Had the bill come to a vote, that number could’ve doubled given the unpopularity of the legislation and lingering concerns among centrists.

So why is GOP leadership blaming the Freedom Caucus?

After all, conservatives were doing what they promised voters: repeal Obamacare. Presented with a flawed bill, they tried to make it better—even if it meant major compromises.

Their reward? Facing the scorn of a Trump tweet.

One thing is clear: There are too many Republicans who would prefer to keep Obamacare rather than repeal it, and those claiming they want to “drain the swamp” need to figure out, and figure out fast, what that means.

Let’s applaud the Freedom Caucus, and certainly not fight it.