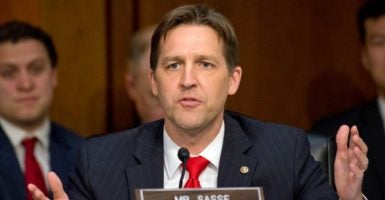 A group of Republican senators is leading an effort to end government-backed “too big to fail” bailout policies.

In an effort to end the practice of taxpayer bailouts of private companies, 10 Republican senators from the Senate Banking Committee penned a letter to the Trump administration requesting that he terminate these policies for nonbanks, claiming they have resulted in significant expenses.

“Too big to fail” is a policy implemented by the Obama administration under the Dodd–Frank Wall Street Reform and Consumer Protection Act that allowed the Financial Stability Oversight Council—a federal board—to offer nonbanks taxpayer support for bailouts.

The letter said, “You have our strong support for using all the tools available as Secretary of Treasury to end ‘too big to fail’ and ensure that hard-working Americans are not responsible for any new bailouts.”

The senators specifically targeted the Financial Stability Oversight Council, as they claimed the council carries out “inconsistent practices,” which result in “unnecessary regulatory costs” that can hurt U.S. businesses.

The letter demanding the end of “too big to fail” policies was signed by Republican Sens. Tom Cotton from Arkansas, Pat Toomey from Pennsylvania, Richard Shelby from Alabama, Mike Crapo from Idaho, Mike Rounds from South Dakota, John Kennedy from Louisiana, Ben Sasse from Nebraska, David Perdue from Georgia, Thom Tillis from North Carolina, and Tim Scott from South Carolina.

The lawmakers also added that Secretary of Treasury Steve Mnuchin should evaluate the Financial Stability Oversight Council’s practices to rethink other financial rules and regulations.

In February, President Donald Trump signed an executive order that allowed the Department of the Treasury to review fiscal regulations, which include policies put in place by the Dodd-Frank Act that allowed for the creation of Financial Stability Oversight Council and “too big to fail.”

“Get rid of the designation process altogether. If you want to end ‘too big to fail,’ the last thing you want is to have the federal government identifying the firms that are too big to fail,” said Norbert Michel, a finance expert at The Heritage Foundation.

On the other side of the aisle, Democrats have defended these policies, claiming they play a vital role in preventing financial institutions from causing another economic catastrophe.

“[Financial Stability Oversight Council’s] authority to designate nonbank financial companies is a critical tool to address potential threats to financial stability, and it has made our financial system safer and more resilient,” Lew said. “We intend to continue defending vigorously the process and the integrity of FSOC’s work, and I am confident that we will prevail.”