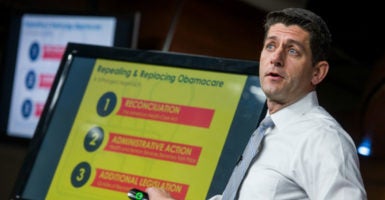 This budgetary analysis projects that the GOP bill would reduce the number of insured by 24 million, but would also decrease the deficit by $337 billion. It also reported the bill would reduce federal outlays by $1.2 trillion and lower federal revenue by $0.9 trillion by getting rid of taxes, fees, and fines.

As with any evaluation of large-scale legislative changes, there is great uncertainty surrounding this CBO score.

This uncertainty is exerting a direct influence on the GOP debate and on what amendments will ultimately end up in the final bill. Let’s take a closer look at some key takeaways from the CBO score as well as where it falls short.

According to the CBO score, the largest projected savings in the GOP bill come from reforms to Medicaid, along with the elimination of Obamacare’s subsidies in the individual market.

But the CBO’s score on Medicaid may be overstated.

The score reflects an assumption that more states would likely have expanded Medicaid in the future under Obamacare, when in fact this may not be true. Thus, CBO’s projection that 14 million fewer people would be insured due to not having Medicaid under the GOP plan might be too high.

This uncertainty also has secondary effects.

In Medicaid, the CBO projects that these changes will result in $880 billion in savings from 2017 to 2026. While a portion of these savings come from reforming the Medicaid program with per capita caps, a large portion comes from fewer people being on the program.

Many analysts and legislators have questioned the magnitude of the insurance losses due to the American Health Care Act, but there are tradeoffs that should be acknowledged. If coverage losses are less, so are budget savings.

The CBO estimates that tax credits in the House legislation will lead to less coverage than Obamacare due to the credit being less generous on average, especially for older Americans as well as some lower-income Americans. It estimates that coverage losses will be around 2 million in 2026 in the non-group market.

This number would be against a baseline that assumes Obamacare will enroll 7 to 8 million more people in the individual market, when in reality it does not appear this will be the case.

Much of the uncertainty also stems from the CBO’s past difficulties in accurately evaluating the effects of mandates and subsidies within the individual market.

On a March 15 Facebook event, Doug Elmendorf, former CBO director and Harvard Kennedy School dean, discussed some of the issues the CBO encountered when he oversaw the scoring of Obamacare.

He went on to highlight that eligibility is difficult to determine for lower incomes, which is one of the reasons one would observe these sorts of discrepancies.

For example, in 2010, the CBO said that there would be 21 million people enrolled in the exchanges by 2016. The reality is that this number was much closer to 10 million.

While a troubled implementation played a role in lowering the number of people that signed up, the CBO might also ascribe too much power to the individual mandate.

In fact, Elmendorf thinks this is the case. He admits, “One thing we misjudged at the CBO was how effective the mandate, penalties, and subsidies would be at moving people into the exchanges.”

In the score of the American Health Care Act, the CBO predicts that 14 million will lose coverage next year, due largely to the repeal of the individual mandate. This suggests the CBO might still need to revisit its assumptions about the power of mandates.

Of the aggressive assumptions made in this score, this might be the most powerful, considering 36 percent of that reduction is in Medicaid—something the law does not strongly touch until 2020.

Additionally, assuming such a strong effect of the mandate in the Medicaid program leads one to question the assumptions the CBO has made about Medicaid enrollees.

Moving forward, various amendments will force adjustments to scores and speculation around the effects of the American Health Care Act.

An example of something important that we’ve already seen show up in the House Rules Committee’s amendments is a change to the rates at which the per capita cap in Medicaid grows. The amendments would increase the growth rate for elderly and disabled populations from medical inflation to medical inflation plus one.

Such changes will cut into budget savings estimates from the CBO, while other amendments such as Medicaid expansion freezes could push a score in the opposite direction.

In other words, on top of the uncertainty surrounding scores, it is important to acknowledge that future amendments can have drastic effects on the bottom line.

While the CBO’s score of the American Health Care Act might overstate the coverage effects of the law, it does provide important insight into the diverse effects and tradeoffs within the law. Moving forward, the CBO will continue to evaluate the GOP bill and forthcoming changes.

For Congress, it is important to acknowledge the limitations and uncertainty of such a large-scale score, but also very crucial to utilize these evaluations to have transparent discussion about the real effects of this legislation.