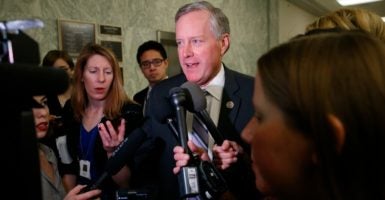 The House was initially expected to vote on the American Health Care Act tonight. But according to the Associated Press, Republican leaders delayed the vote.

It’s unclear when the vote for the bill will take place, but procedural votes will take place tonight, according to Politico. But the change is a setback for House Speaker Paul Ryan and Trump, who are struggling to drum up support for their health care plan from both conservative and centrist Republicans.

Meadows and members of the conservative House Freedom Caucus met with Trump and his key advisers Thursday in the hours before the House was expected to vote on the bill to repeal and replace Obamacare.

Following the meeting, Meadows said there was “no deal” in place at that time, according to the Associated Press.

Conservatives want Obamacare’s insurance regulations repealed in the plan, and say they believe undoing them will lower the cost of insurance premiums.

Trump met with the conservatives in hopes of convincing them to support the bill. But ultimately, it doesn’t appear the members were swayed at the meeting.

This piece has been updated and changed to reflect the news that the vote will be delayed.