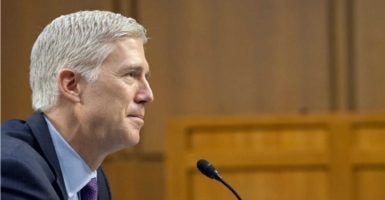 During his Supreme Court confirmation hearing, Judge Neil Gorsuch addressed accusations from a former law student claiming he had encouraged sexist hiring practices in the classroom.

The student in question, Jennifer Sisk, took one of the Supreme Court nominee’s classes at the University of Colorado Law School and wrote in a letter sent to lawmakers Sunday night that Gorsuch said “many” working women exploit employers when receiving maternity benefits.

The Daily Signal reported Monday that Sisk has close ties to the Democratic Party. She is a former political appointee of the Obama administration and worked for former Sen. Mark Udall, a Democrat. In covering Sisk’s allegations, multiple media outlets did not initially disclose her ties to Democrats and President Barack Obama.

After being questioned about the letter by Sen. Dick Durbin, D-Ill., Gorsuch—who noted the first time he heard about this was the night before his confirmation hearing—responded to this accusation by implying that it was a misunderstanding he wanted to clear up.

“I teach from a standard textbook … there is one question in the book that is directed at young women—because sadly, this is a reality that they sometimes face,” Gorsuch said.

“The problem is this: Suppose an older woman at the firm that you’re interviewing at asks you if you intend to become pregnant soon, what are your choices as a young woman?” Gorsuch asked rhetorically. “You can say yes, and tell the truth … and not get the job and not be able to pay your debts [from law school]. You can lie, maybe get the job, say no, that’s a choice, too, it’s a hard choice. Or you can push back in some way, shape, or form.”

The judge added that the question raised by the textbook was a part of a broader discussion on the hardships lawyers face in life, including high suicide rates, alcoholism, divorce, depression, and financial difficulties.

“We talk about the pros and cons in this erratic dialogue and they can think through things on how to answer very difficult questions,” Gorsuch said.

Gorsuch then asked that everybody who has heard questions like this from employers to raise their hand—attempting to make the point that these “inappropriate questions about family planning,” as he said, are fairly common.