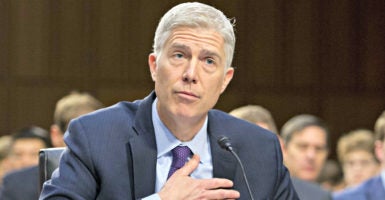 “Hobby Lobby came to court and said, ‘We deserve protections too. We’re a small, family-held company … ,’” Gorsuch said of the retail chain in a second day of confirmation hearings before the Senate Judiciary Committee. “They exhibit their religious affiliations openly in their business.”

The Supreme Court ruled 5-4 in the Hobby Lobby decision on June 30, 2014, as The Daily Signal reported, that the government can’t compel a “closely held” business to cover abortion-inducing drugs or devices in employee health plans if doing so would violate the employer’s moral and religious beliefs.

Gorsuch said the Religious Freedom Restoration Act (RFRA), proposed by Schumer when he was in the House and signed into law by President Bill Clinton in 1993, helped inform his judgment on matters relating to religious freedom, including the Hobby Lobby case.

Schumer, now the Senate’s top Democrat as minority leader, has expressed skepticism about Gorsuch’s record. Gorsuch was part of the 5-3 majority on the 10th U.S. Circuit Court of Appeals that ruled in favor of Hobby Lobby before the case went to the Supreme Court.

In his opinion supporting the retail chain, Gorsuch wrote:

It is not for secular courts to rewrite the religious complaint of a faithful adherent, or to decide whether a religious teaching about complicity imposes ‘too much’ moral disapproval on those only ‘indirectly’ assisting wrongful conduct. Whether an act of complicity is or isn’t ‘too attenuated’ from the underlying wrong is sometimes itself a matter of faith we must respect.

Schumer, along with Sen. Orrin Hatch, R-Utah, and Kennedy, “wrote a very, very strict law,” Gorsuch said Tuesday. “And it says that any sincerely held religious belief cannot be abridged by the government without a compelling reason.”

“I have applied that same law, RFRA,” he added, “to Muslim prisoners in Oklahoma, to Native Americans who wished to use an existing sweat lodge in Wyoming, and to Little Sisters of the Poor.”

Gorsuch said he believes that it was only just to afford Hobby Lobby the same religious freedom protections.

He said the owners of Hobby Lobby exhibit their Christian beliefs by playing religious music in their stores, refusing to sell alcohol, and “clos[ing] on Sundays, though it costs them a lot.”

“They came to court and said, ‘We’re entitled to protection, too, under that law,’” Gorsuch said. “It’s a tough case. We looked at the law, and it says any person with a sincerely held religious belief is basically protected except for strict scrutiny.

“What does ‘person’ mean in that statute?” he asked.

Because Congress did not define “person,” Gorsuch said, he looked to the Dictionary Act.

The Dictionary Act, dating to 1871, “instruct[ed] courts to apply to all federal statutes definitions of certain common words,” which include “person,” according to the Yale Law Journal.

Because Congress “has defined ‘person’ to include corporation,” Gorsuch said, it was lawful to afford Hobby Lobby religious freedom protections.

“So you can’t rule out the possibility that some companies can exercise religion,” Gorsuch said, adding:

And of course we know churches are often incorporated and we know nonprofits, like Little Sisters or hospitals, can practice religion. In fact, the government in that case conceded that nonprofit corporations can exercise religion.

Gorsuch is expected to continue answering questions from the Judiciary Committee through Tuesday and Wednesday.