Why Trump’s Budget Proposal for the State Department Makes Sense 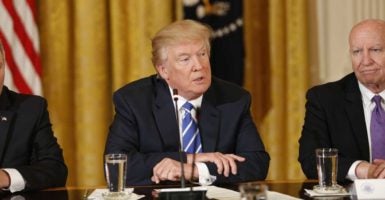 President Donald Trump has made some promising proposals to trim government spending in his recently released budget blueprint.

Trump’s significant 2018 budget cut of 28 percent for the Department of State, the U.S. Agency for International Development, and other U.S. government foreign affairs agencies makes a lot of sense. The cut seems dramatic, but comes on the back of more than a decade of expansion during which the foreign operations budget nearly doubled.

The Trump budget does many good things. For example, it eliminates the cronyist Overseas Private Investment Corporation, a move that Heritage Foundation senior trade policy analyst Bryan Riley and other Heritage scholars have long recommended.

Also on the chopping block: USAID’s Global Climate Change Initiative and all payments to the United Nations’ climate change programs.

In calling for the elimination of this funding last year, former Heritage scholar, David Kreutzer, wrote that the United Nations Framework Convention on Climate Change had devolved into little more than a mechanism to redistribute wealth and to dramatically rework and centralize the world economy with little or no impact on climate. Cutting this funding is a good first step toward U.S. withdrawal from the convention.

Given a second chance: the Millennium Challenge Corporation, which had strayed from its hard emphasis on anti-corruption during the Obama years but which was spared from outright elimination in the Trump budget.

Although Trump did not heed the call by Heritage senior research fellow Lisa Curtis to continue funding the United States Institute of Peace, the overall direction of Trump’s foreign operations budget is in line with Heritage foreign policy expert Jim Carafano’s advice: Cut the U.S. foreign aid budget in favor of increased defense spending to make the world safer.

The president’s dramatic budget cut will leave no choice but for the State Department and USAID “to pursue greater efficiencies through reorganization and consolidation in order to enable effective diplomacy and development.”

In the words of the budget announcement, a complete overhaul of U.S. foreign aid will refocus “economic and development assistance to countries of greatest strategic importance to the U.S.” and ensure “the effectiveness of U.S. taxpayer investments by rightsizing funding across countries and sectors.”

Overall, the budget cuts will force the reorganization of the State Department that Schaefer recommended last year, to make it a more effective and capable agency ready to resume its role as the primary implementer of the nation’s foreign policy.