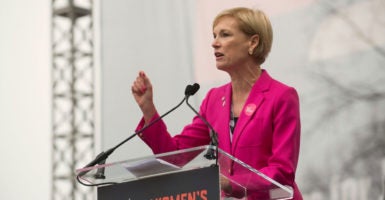 After spending over $30 million on the 2016 election, Planned Parenthood has a new project: a million-dollar ad campaign defending its government funding.

The organization, which receives over half a billion dollars from taxpayers each year, stands to lose a significant portion of its government funding should Congress pass a reconciliation bill that includes the House Energy and Commerce Committee language making Planned Parenthood affiliates ineligible for receiving Medicaid reimbursements for one year after the enactment of the bill.

Desperate to keep the tax dollars flowing, Planned Parenthood’s latest campaign will reportedly highlight the abortion giant’s “cancer screening and prevention services,” as they are referred to in the group’s annual reports, which, according to Planned Parenthood’s own numbers, have decreased by 57 percent since 2010.

It’s not surprising that Planned Parenthood intends to highlight cancer-related services rather than its abortion activity. But policymakers should keep several important facts in mind during the debate surrounding tax dollars and entanglement with the abortion industry.

It’s also worth noting that the most recent data available about Planned Parenthood’s activity comes from the 2014-2015 annual report, which was released in December 2015. As previously discussed here at The Daily Signal, these annual reports are typically published in December or January, so the latest report addressing 2015-2016 was expected to be available by now.

But it’s nowhere to be found, and requests from The Daily Signal to Planned Parenthood’s press team have gone unanswered.

How many cancer screening and prevention services did Planned Parenthood provide during the most recent reporting year? How many unique patients were served? How many abortions were performed?

Planned Parenthood isn’t saying, but is going to great lengths to keep the tax dollars flowing in the meantime.