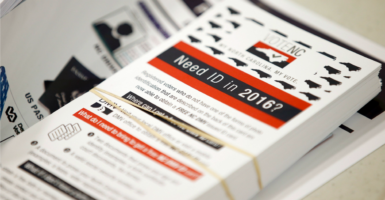 Fliers in Charlotte, North Carolina, inform people about the voter ID law that will go into effect in the 2016 election, Nov. 3, 2014. (Photo: Chris Keane/Reuters/Newscom)

A new study by professors from Yale, Stanford, and the University of Pennsylvania challenges the notion that voter ID laws disproportionately affect minorities.

“For a perfect example of the term ‘alternate facts,’ look no further,” @LCChurchwell says.

The new study finds “no definitive relationship” between tough laws requiring voters to present identification and a dropoff in Hispanic, black, and other minority turnout.

The study comes as a response to another one, published and widely reported in January, that asserted states with voter ID laws drive down turnout on Election Day, particularly among Hispanics. That earlier study, conducted by professors from the University of San Diego and Bucknell University, often is cited by liberal opponents of voter ID laws.

The study released March 10 questions the numbers of the January report, which were based on the Cooperative Congressional Election Study, or CCES, a multi-university resource associated with Harvard University. Citing inaccuracies and errors in the previous study, it says:

Here, we show that the results of this paper are a product of large data inaccuracies, that the evidence does not support the stated conclusion, and that model specifications produce highly variable results. When errors in the analysis are corrected, one can recover positive, negative, or null estimates of the effect of voter ID laws on turnout. Our findings underscore that no definitive relationship between strict voter ID laws and turnout can be established from the validated CCES data.

The new study was conducted by political science professors Eitan Hersh of Yale University, Marc Meredith of the University of Pennsylvania, and Justin Grimmer and Clayton Nall of Stanford University, along with Jonathan Mummolo, a doctoral candidate at Stanford. The new report suggests the previous study was biased:

These measurement errors in turnout raise the potential of both inefficiency and bias. Even if these laws affect turnout, measurement error may add so much noise to the data that we fail to detect any effects (inefficiency). And once the data are aggregated by state, if measurement errors are correlated with the adoption of voter ID laws, we will recover the wrong treatment effect estimates (bias).

In an op-ed last month in The Washington Post, the professors wrote:

But when we dig deeper and look specifically at racial and ethnic minority turnout, we see a significant drop in minority participation when and where these laws are implemented.

Hispanics are affected the most: Turnout is 7.1 percentage points lower in general elections and 5.3 points lower in primaries in strict ID states than it is in other states. Strict ID laws mean lower African American, Asian American and multiracial American turnout as well. White turnout is largely unaffected.

Some media outlets too quickly embraced the report from the University of San Diego and Bucknell University, said Logan Churchwell, spokesman for the Public Interest Legal Foundation, which advocates voter ID laws and investigates voter fraud.

“For a perfect example of the term ‘alternate facts,’ look no further,” Churchwell told The Daily Signal, referring to the first study. “For years, activists and academics have been searching for the silver bullet to prove voter ID is harmful to minorities, despite broad support for the laws across every demographic.”

“Many federal courts have been asked to do the same: Find a causal link between voter ID and intentional decreases in minority turnout,” he said. “All eventually failed. Despite this, too many in the media are willing to report an initial study as gospel before peer reviewers can weigh in. It should have struck many news editors weeks ago that it took until 2017 to provide proof to a belief that could have been confirmed a decade ago, if true.”