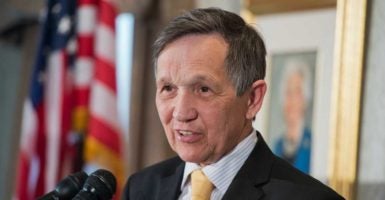 President Donald Trump received some unlikely support this week when Dennis Kucinich, a former congressman and two-time Democrat presidential candidate, said that he had been subject to wiretapping under the Obama administration.

“I can vouch for the fact that extracurricular surveillance does occur, regardless of whether it is officially approved,” Kucinich wrote in an op-ed published by Fox News. “I was wiretapped in 2011 after taking a phone call in my congressional office from a foreign leader.”

Investigative journalists from The Washington Times played the recording for Kucinich in 2015.

“The call had been from Saif el-Islam Qaddafi, a high-ranking official in Libya’s government and a son of the country’s ruler, Moammar Qaddafi,” Kucinich wrote, adding that the phone call had occurred “four years earlier.”

When Kucinich, a liberal Democrat, was asked to explain his “allegation” in a radio interview with “Trending Today USA with Rusty Humphries,” he said:

Well it’s not an allegation, Rusty. … Somebody in the Obama administration tapped my phone. The recording was played for me. I heard the recording. And I authenticated it a few years after I left office.

Kucinich condemned wiretapping between government powers, saying, “That’s illegal. It’s a violation of separation of powers. Members of Congress have the right under the Constitution to gather information and the administration had no right to go after my phone conversation.”

Trump has been under attack in recent weeks for accusing former President Barack Obama of wiretapping his phone calls during the presidential election.

Terrible! Just found out that Obama had my "wires tapped" in Trump Tower just before the victory. Nothing found. This is McCarthyism!

“This stuff does happen,” Kucinich said. “And when I heard about what happened to President Trump or what he alleged happened, to me it seemed plausible because it happened to me.”

“[Trump] doesn’t really think that President Obama went up and tapped his phone personally,” Spicer said. “There’s no question that the Obama administration, that there were actions about surveillance and other activities that occurred in the 2016 election.”

“That is a widely reported activity that occurred back then,” Spicer said. “The president used the word ‘wiretap’ in quote to mean broadly surveillance and other activities.”

As for Kucinich, he said many questions remain unanswered.

“Five years later I am still waiting for FOIA [Freedom of Information Act] responses from some of the intelligence agencies,” he wrote in his Fox News op-ed. “I cannot say with assurance that my Libya call was the only one intercepted.”