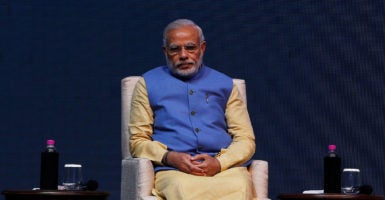 Indian Prime Minister Narendra Modi has been in office since 2014 and is a Hindu nationalist. (Photo: Adnan Abidi/Reuters/Newscom)

In a sad development, the government of India is clamping down on religious liberty, and impoverished children stand to lose the most.

Compassion International, a Christian organization that partners with local churches around the world to improve the lives of children in poverty, began shutting down its operations in India due to financial restrictions imposed on them by the Indian government. This will leave an estimated 145,000 children worse off.

The shutdown comes after months of attempts to convince the Indian government to reverse its decision, and the clampdown on Compassion International comes amid other government actions against nearly 11,000 faith-based and secular organizations operating in India.

Compassion International is a faith-based aid organization that provides humanitarian assistance for underprivileged children around the world, and has operated in India since 1968. The group is the largest single foreign provider of assistance in India, contributing around $45 million in humanitarian aid annually.

Stephen Oakley, general counsel for Compassion International, testified that the organization hosts programs that run five to six days a week, and provides meals, medical treatment, and tutoring, as well as financial assistance for school tuition.

While these programs are run out of the local Christian churches, Compassion International denies that any forced conversions take place and does not use adherence to Christianity as a condition for providing assistance. The aid is purely based on need.

But the Indian government has cited forced conversions and subversion of the national interest under the Foreign Contribution Regulation Act to block Compassion International’s funding in India.

According to testimony by John Sifton of Human Rights Watch, the Foreign Contribution Regulation Act is the primary tool the Indian government uses to restrict aid organizations. Irfan Nooruddin of Georgetown University goes on to explain how the law was passed during India’s emergency period in the 1970s in order to reduce the influence of foreign organizations during a rise in autocratic rule in India.

The law’s roots are anti-democratic and they remain so to this day, according to Nooruddin.

The government also pointed to evidence of conversions by organizations supported by Compassion International, and its mission statement—which lists turning children into responsible Christian adults as a priority—to argue that it is a religious organization.

For these reasons, the Indian government decided to keep the restrictions in place even after a meeting with Compassion International and U.S. representatives. The Indian government told the U.S. representatives that Compassion International or the organizations it works with should re-register as religious organizations, based on their activities.

While religious liberty is codified in Article 15 of the Indian Constitution, and is an important right in a multicultural and multireligious society, it has recently come under pressure in India due to a rise in Hindu nationalism.

Lisa Curtis, a Heritage Foundation senior fellow and South Asia expert, commented in a January 2015 article on the importance of religious liberty in India and the need for Prime Minister Narendra Modi to support it. Curtis noted:

Unless [Modi] makes it clear that he will not tolerate activities … that call into question India’s commitment to religious freedom and pluralism, he risks tarnishing the international reputation of his government. Failing to affirm his support for religious freedom as an integral aspect of Indian pluralistic democracy would also dampen Indo-U.S. ties.

Aside from reducing channels of humanitarian assistance, India’s new restrictions on international humanitarian organizations call into question the state of religious freedom in the country—a troubling trend for such a large and diverse country.