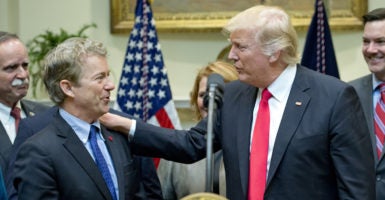 Sen. Rand Paul, R-Ky., left, and other conservatives have come out against a plan from House Republican leaders to repeal and replace Obamacare. Paul says conservatives are ready to negotiate, and President Donald Trump appears willing to listen. (Photo: Ron Sachs/CNP/AdMedia /Newscom)

Conservatives in the House and Senate may have come out swinging against Republican leadership’s plan to replace Obamacare, but the skeptical lawmakers stress that they’re ready to negotiate.

So far, conservatives seem to have found a willing negotiating partner in President Donald Trump, though the president and his administration have endorsed the House GOP’s Obamacare replacement bill.

The House’s most powerful Republican, Speaker Paul Ryan, and his deputies appear less willing to play ball with the lower chamber’s right flank, however.

Their target: the members of the roughly 40-member House Freedom Caucus and conservative organizations such as The Heritage Foundation and Americans for Prosperity.

The charm offensive has been ongoing and swift.

Vice President Mike Pence met Tuesday with House Republicans, including members of the conservative Freedom Caucus, to discuss the legislation.

And in a further attempt to gin up support for the proposal, Trump invited skeptical Freedom Caucus members to a night of bowling at the White House next week.

The efforts are part of the White House’s full-court press to get legislation that both repeals and replaces Obamacare, at least in large part, across the finish line.

And the Freedom Caucus is the key faction for the White House to sway.

The lawmakers oppose the timeline for phasing out Obamacare’s expanded eligibility for Medicaid, which the leadership proposal rolls back in 2020, and also creation of advanceable, refundable tax credits based on age to help Americans buy health insurance.

“The first thing Republicans are bringing forward is a piece of legislation that we’re going to put on a Republican president’s desk that says repeal [Obamacare], but keeps Medicaid expansion and actually expands it, that keeps some of the tax increases,” Rep. Jim Jordan, R-Ohio, told reporters Tuesday at a press conference.

“That is not what we promised the American people we were going to do,” the former Freedom Caucus chairman said.

Instead, Jordan, along with Sens. Rand Paul, R-Ky., and Mike Lee, R-Utah, and other conservative lawmakers have stressed that the vehicle for Obamacare’s repeal already exists: the 2015 bill to dismantle the health care law’s key provisions that passed both chambers of Congress but was vetoed by President Barack Obama.

Though conservatives ideally would like to see GOP leaders bring up the 2015 bill once again—Jordan and Paul actually introduced that same legislation this week in their respective chambers—they’re not opposed to negotiating.

“This is the beginning of the negotiation,” Paul said at the press conference Tuesday. “The House Freedom Caucus’ power and the power of several conservatives in the Senate is to withhold our support and to make it better. If they have 218 votes, we won’t get any change.”

In the House, the Obamacare replacement plan needs 218 votes, a majority, to pass. So Ryan can’t afford to lose more than 19 votes.

Conservatives already have attempted to use the legislative process to tweak the bill’s phaseout of the Medicaid expansion.

Rep. Joe Barton, R-Texas, a Freedom Caucus member, and Rep. Marsha Blackburn, R-Tenn., introduced amendments in the House Energy and Commerce Committee to freeze new enrollment in Medicaid expansion at the enhanced federal matching rate—95 percent for 2017, with a decrease to 90 percent for 2020 and beyond—at the end of this year.

The current plan phases out the Medicaid expansion in 2020. Until then, states would still be able to enroll residents with a federal matching rate of 90 percent.

Beginning in 2020, new Medicaid enrollees would receive the traditional federal matching rate, an average of 57 percent.

Rep. Morgan Griffith, R-Va., also a Freedom Caucus member, introduced an amendment instituting a work requirement for childless adults who are on Medicaid.

Both amendments received the support of the 170-member Republican Study Committee, a group of lawmakers who tend not to be as conservative as those in the small Freedom Caucus.

But Barton withdrew his amendment from the Energy and Commerce Committee on Thursday, after the panel held a 27-hour markup of the Obamacare replacement plan.

So far, it’s not only conservatives who are willing to negotiate. Leaders of conservative groups who met Wednesday with Trump said he, too, seems willing to play ball.

Our wonderful new Healthcare Bill is now out for review and negotiation. ObamaCare is a complete and total disaster – is imploding fast!

“I’m encouraged because the president is listening to those of us who have concerns about the American Health Care Act, and because he understands that we want to help him keep his promise to repeal Obamacare and to prevent health insurance prices from skyrocketing further,” Jenny Beth Martin, president of Tea Party Patriots, told The Daily Signal.

Martin was one of the conservative leaders who met with Trump and other aides in the Oval Office.

The Tea Party Patriots leader said Trump didn’t make any commitments to changing parts of the bill that conservatives dislike, such as the Medicaid expansion or tax credits, but instead listened to what they had to say.

Trump told the conservative leaders that many of their concerns could be addressed in step three. Ryan has been saying much the same.

Conservative groups have come out in fierce opposition to the House GOP leadership’s Obamacare replacement plan.

But after meeting with Trump, Martin and other leaders, among them FreedomWorks President Adam Brandon, struck a more positive note on the direction of the bill.

“Republicans right now have a tremendous opportunity,” Martin said. “I’m going to keep a little bit of a hopeful, optimistic spirit that they will take advantage of the opportunity the American people have given them.”

In a statement released Wednesday, Brandon called the conversation with Trump “constructive.”

“The concerns that have been raised by Sen. Paul, Sen. Lee, and members of the House Freedom Caucus are real, and we believe that we can negotiate on these provisions, address them in a substantive way, and get to ‘yes’ on this bill and throw Obamacare into the dustbin of history,” Brandon said.

Though conservatives may have a willing negotiator in Trump, Ryan appears to be digging in.

The House speaker has maintained the position that lawmakers constructed the replacement plan over a year’s time, and with ample input from his fellow Republicans.

“This bill was worked on from January to June last year so we could offer our constituents and the American people in our Better Way agenda what we could replace Obamacare with,” Ryan, referencing House Republicans’ reform agenda, told reporters Thursday. “We ran on it all through the election, and now we’ve translated it through legislation.”

Obamacare is collapsing. Premiums and deductibles are going up, and options are going down. We need to #RepealAndReplace it. pic.twitter.com/xkHieOs3BL

The speaker questioned whether any of the changes conservatives want to see now would pass muster in the Senate.

Republicans are using a budget tool called reconciliation to fast-track Obamacare repeal and replacement through the Senate, where it can pass with 51 votes rather than the 60 normally needed to end debate.

But strict rules govern the budget reconciliation process, and the tool can be used only on bills that change taxes, spending, or the deficit.

Because reconciliation is limited to legislation addressing fiscal policy, Democrats will be ready to challenge any provision of the bill they can argue runs afoul of the Byrd rule.

The Byrd rule was adopted in 1985 to ensure reconciliation is only being used to adjust the budget or reduce the deficit.

Ryan argued that any changes to the bill—including those conservatives urge—could jeopardize its fast-track or “privileged” status and make it subject to a filibuster by Democrats.

“The reconciliation tool is pretty tight,” the speaker said. “That’s why you see a lot of confusion and frustration, understandably so.

The House’s No. 2 Republican, Majority Leader Kevin McCarthy, also cast doubt on whether GOP leaders were willing to negotiate.

“I think everybody should get on board,” McCarthy said on “Fox and Friends” on Thursday morning. “This is one of three phases. If you want to see Obamacare replaced, this is the best opportunity to do it. If you want to see replacement that lowers the premiums and actually gives greater quality of care, this is the only option we have going forward.”

But in its current form, the GOP’s proposal is already dead on arrival in the Senate.

Just after it was released, Paul and Lee announced their opposition to the bill.

And pushback from other Republican senators has begun to trickle out since then, including Sen. Tom Cotton, R-Ark., who took to Twitter to urge Republican leaders to “start over.”

If more than two senators oppose the legislation in the upper chamber, the Obamacare replacement plan fails.

Despite the growing opposition from Senate Republicans, Ryan has continued to make a hard sell for the replacement plan.

“We have been waiting seven years to do this. The time is now,” the speaker said. “This is the closest we’ll ever get to repealing and replacing Obamacare.”