Debate on Obamacare Repeal Centers on Medicaid. Here’s How States That Expanded It Are Doing. 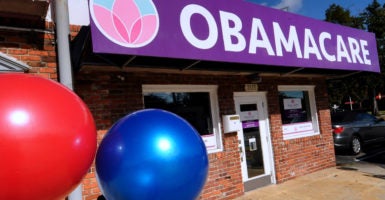 The future of Obamacare's Medicaid expansion is one of the key issues at the center of the health care debate. Thirty-one states expanded Medicaid, and they've seen the number of Medicaid beneficiaries rise and costs increase. (Photo: Paul Hennessy/Polaris/Newscom)

As lawmakers begin to debate a GOP bill to replace Obamacare, both Republicans and Democrats say they worry that Americans who gained insurance under the health care law will lose the coverage once Congress repeals it.

For many, that worry stems from potential changes to Medicaid proposed by Republicans in their plan to replace the health care law.

Under Obamacare, millions of low-income Americans gained health coverage through Medicaid. The federal government footed the bill for the costs of the newly eligible enrollees through 2016.

But health policy experts point to the exploding population of Medicaid beneficiaries and rising costs as proof that the situation is not sustainable.

“People are paying taxes and [Medicaid expansion states] are adding all these people to the Medicaid rolls, and they’re having to pay little to nothing for medical care,” Doug Badger, a senior fellow at the Galen Institute and former adviser to President George W. Bush, told The Daily Signal. “It’s being paid out of somewhere, and much of that burden is being paid by people in other states.”

On the Chopping Block

Traditionally, the Medicaid program was restricted to certain groups of low-income Americans, such as those who are disabled, blind, or pregnant.

But Obamacare expanded Medicaid, which is funded jointly by the individual states and the federal government, to allow Americans to enroll if their incomes are less than 138 percent of the federal poverty line (currently $16,643 for an individual, $33,948 for a family of four).

In the three years since Obamacare’s implementation, 31 states and the District of Columbia expanded Medicaid. Two more, Kansas and Maine, are considering whether to do so.

But with Republicans slowly moving closer to repealing the Affordable Care Act, the Medicaid expansion is one of many aspects of the health care law on the chopping block.

And this issue, in particular, has caused a split among Republicans in both chambers.

Conservatives want to see the Medicaid expansion repealed in full and the program reformed for the future.

But Republican lawmakers and governors who represent states where Medicaid expanded have asked GOP leaders for assurances that those who were newly eligible for Medicaid wouldn’t lose their coverage when Obamacare is repealed.

“We cannot turn our backs on the most vulnerable,” Ohio Gov. John Kasich, a Republican who expanded Medicaid, told CNN last month. “We can give them the coverage, reform the program, save some money, and make sure that we live in a country where people are going to say, ‘At least somebody’s looking out for me.’”

“It’s not a giveaway program,” Kasich said. “It’s one that addresses the basic needs of the people in our country.”

Before then, states that expanded Medicaid coverage still would be able to enroll residents with a matching rate of 90 percent from the federal government. Beginning in 2020, though, new Medicaid enrollees would receive the traditional federal matching rate, an average of 57 percent. (Editor’s note: When first published, this report incorrectly suggested expanded enrollment would cease.)

Many states have enrolled millions of newly eligible residents.

But health policy experts say the Medicaid expansion has been detrimental to the budgets of states that embraced it and the resources available to populations the Medicaid program initially was designed to help.

“We see this as a moral issue, because what states have done is create this new category within the Medicaid program, which is a program that was originally intended to serve [the] aged, the blind, the disabled, low-income families, pregnant women—[those] we think about as the truly needy and truly vulnerable,” Nic Horton, a senior research fellow at the Foundation for Government Accountability, told The Daily Signal.

“Obamacare’s Medicaid expansion changed that in states that accepted it,” Horton said.

In a November report, the Foundation for Government Accountability examined enrollment projections for states that expanded Medicaid.

Twenty-four states projected that 5.5 million newly eligibly Americans would sign up. In reality, the number of able-bodied adults who enrolled in Medicaid was more than double that, nearing 11.5 million, according to the most recent data available.

Horton dubbed this an “enrollment explosion.”

“That means more than twice as many able-bodied adults that the states and federal taxpayers have to pay for,” he said.

Horton warned that in expansion states, where far more low-income Americans enrolled in Medicaid than policymakers expected, services that traditionally went to the disabled and needy are being diverted to pay for the additional costs of the expansion population.

“Every penny that’s spent on this new group of able-bodied adults, that’s a penny that can’t go to the traditional Medicaid program,” he said.

Badger also noted that as the Medicaid population has grown, the number of providers accepting Medicaid patients hasn’t changed.

Studies have suggested that Medicaid patients have had trouble finding providers, and have worse outcomes than those without insurance.

A study from the University of Virginia examining major surgical operations that occurred between 2003 and 2007 found that for eight different procedures, Medicaid patients were more likely to die in the hospital or suffer complications than the uninsured and privately insured.

For conservative lawmakers, the crux of their issue with the Medicaid expansion lies in the money the federal government is sending to participating states.

From 2014 to 2016, the federal government financed 100 percent of the costs of the newly eligible Medicaid population, but the federal contribution is slated to drop to 90 percent by 2020 and beyond.

As states have enrolled more adults in Medicaid, costs have risen.

“California is shifting the costs of covering this population to other states, including to states that have chosen not to expand their programs,” Badger said. “California has very little skin in the game. You can enroll someone in this population and shift the cost to Idaho, and Florida, and Texas, the taxpayers in other states.”

Idaho, Florida, and Texas did not expand Medicaid.

#Medicaid funding for most vulnerable must be protected, & more must be done to improve access to drs & quality care https://t.co/eixqtQHSs9 pic.twitter.com/4obUBBxUcN

Though the federal government financed all of the costs of covering those newly eligible for Medicaid, states that expanded Medicaid are beginning to examine their own budgets since they’re now picking up 5 percent of the tab.

“Before expansion, the traditional Medicaid program was already the largest item in most state budgets,” Horton said, adding:

It’s the home mortgage in the state budget. You pay it first, and figure out what comes next. It’s the biggest piece in most states. Now you’ve taken that and added this expansion on top of it.

Now that we’re into 2017, states are on the hook for 5 percent of those costs. The days of free money from the federal government are over. That this isn’t costing us anything … we’re living it and seeing that states are having to find that money. That money has to come from somewhere else in the budget—from education, from law enforcement, from infrastructure spending, from the traditional Medicaid program, or tax increases.

While Republicans in Congress debate the future of the Medicaid expansion, some states have begun to take action to curb enrollment in their Medicaid programs.

Last week, the Arkansas House of Representatives voted to freeze enrollment for those newly eligible for Medicaid beginning July 1.

“Currently, we have over 330,000 folks on the program,” state Rep. Josh Miller, a Republican, told the Arkansas Democrat-Gazette. “We are on an unsustainable path, especially with the looming new acts that are going to come out of Washington, D.C.”

Gov. Asa Hutchinson, a Republican, opposes the bill. But if it were to earn his signature, Arkansas would need a waiver from the federal government to proceed.

But Horton said other states should follow the lead of Arkansas.