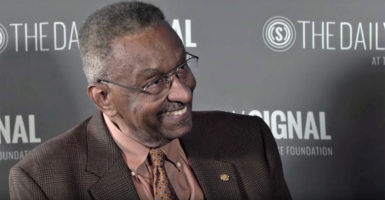 As a winner of a Bradley Foundation award, economist Walter E. Williams is recognized for being "a tireless defender of personal liberty, economic freedom, and limited government." (Photo: The Heritage Foundation)

Walter E. Williams, an economist and professor at George Mason University, is one of four recipients to be awarded the 2017 Bradley Prize, an award given out annually by the Lynde and Harry Bradley Foundation.

The $250,000 award, given to up to four distinguished individuals each year, “recognize[s] individuals of extraordinary talent and dedication,” whose values coincide with those of the Bradley Foundation.

Through “recognizing that responsible self-government depends on enlightened citizens and informed public opinion,” the foundation, created by Lynde and Harry Bradley, brothers and business partners, supports scholarly research, like the work produced by Williams.

Williams is the author of numerous books and publications, according to his personal website. His syndicated column is also published by many newspapers and websites, including The Daily Signal.

Williams has also served on several advisory boards, including the Cato Institute, Landmark Legal Foundation, Institute of Economic Affairs, and The Heritage Foundation.

The president and CEO of the Bradley Foundation went on to say, “Through the Bradley Prizes, we recognize individuals like Dr. Williams, who, through his personal and intellectual courage, has inspired his students to become active in support of freedom and free markets.”

Williams will be formally recognized at an award ceremony at the Shakespeare Theatre Company in the District of Columbia on April 6.