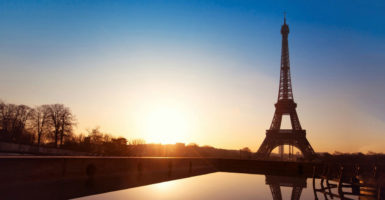 Reports have also surfaced that top officials in the Trump administration are divided on whether to pull out of the Paris protocol.

Trump should keep his campaign promise and withdraw, not just from Paris, but from the entire United Nations Framework Convention on Climate Change.

The domestic regulations President Barack Obama submitted as the United States’ national determined contributions to the Paris Agreement aim to reduce domestic greenhouse gas emissions by 26 percent to 28 percent below 2005 levels by the year 2025.

Cumulatively, these regulations will restrict economic growth and kill jobs.

A common argument for the U.S. to remain in the Paris protocol is that the U.S. must show leadership on climate change. But committing to Paris is merely leading on what not to do.

The high price tag of Paris will generate meaningless climate benefits. The Massachusetts Institute of Technology’s Joint Program on the Science and Policy of Global Change projects that the Paris Agreement will avert a mere 0.2 degrees Celsius warming by the year 2100.

Additionally, it’s a fool’s errand to bank on emissions cuts from rapidly developing countries who want to increase their standards of living and that have more pressing environmental concerns to address than cutting greenhouse gas emissions.

The best way for the U.S. to lead is to promote policies that increase economic freedom, which will in turn increase health and wealth and provide citizens around the world with more resources to adapt to a changing climate.

>>>The Pathway Out of Paris

One of the alleged concerns Trump officials have is that withdrawing from the U.N. framework convention could have “broad and damaging diplomatic ramifications.” But withdrawing would not preclude the U.S. government from studying climate science, understanding any potential risks associated with climate change, and working with nations through informal arrangements to undertake appropriate steps, if necessary.

Instead, withdrawing would simply recognize that the Paris climate agreement is a costly, unworkable, and ineffective approach.

Withdrawing will also prevent future administrations from using the existing U.N. framework to avoid getting the Senate’s advice and consent in the treaty process, which is what Obama did with Paris. If the U.S. remains in, future administrations could ship billions of taxpayer dollars overseas to subsidize green energy technologies, without input from Congress.

If the Trump administration withdraws from the U.N. framework, it would also withdraw the U.S. from any protocol to which it is a party (including Paris), and it would go into force one year after the depositary receives the notification of withdrawal.

Some reports suggested withdrawing from the entire framework could be tricky legally and may require Senate ratification, since the Senate ratified the U.N. framework.

But precedent exists for presidents withdrawing from treaties without Senate approval. As Climate Central reports:

[I]n 1992, President George W. Bush withdrew the U.S. from an anti-ballistic missile treaty that the Senate had ratified in 1972 without seeking the Senate’s approval. After President [Jimmy] Carter withdrew from a defense treaty with Taiwan, the Supreme Court refused to hear a challenge filed by members of Congress.

The clearest and most aggressive pathway out of Paris is to withdraw from the U.N. framework.

On the campaign trail, candidate Trump vowed to “cancel” the Paris climate change agreement that commits America to reducing greenhouse gas emissions, and as president-elect, he said he was keeping an “open mind” about it.

Now as president, he’s largely left us with radio silence and speculation. It’s time to end that speculation.