Who Is the ‘Forgotten Man’? A Historical Look 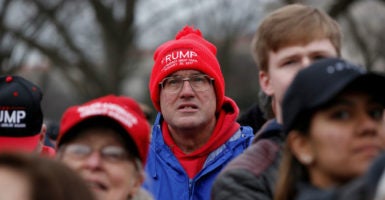 Supporters of President Donald Trump gather on the National Mall during his inauguration in Washington, D.C., on Jan. 20, 2017. (Photo: Shannon Stapleton/Reuters/Newscom)

The Forgotten Man is back with a vengeance.

Since Amity Shlaes revived the phrase in the title of her best-selling history of the Great Depression, “the Forgotten Man” has come to stand in for the losers in the left’s identity politics.

Thus, the 21st-century Forgotten Man has a conventional-sounding name, is heterosexual, never went to graduate school, and does not know where the 202 area code is. (It’s Washington, D.C.)

The Forgotten Man has been featured in The Wall Street Journal and The New Yorker. President Donald Trump name-checked this retro superhero in his Nov. 9 victory speech and his inaugural address: “The forgotten men and women of our country will be forgotten no longer.”

And this Wednesday, Sen. Mike Lee, R-Utah, will address the Forgotten Man directly in a speech at The Heritage Foundation.

Despite all the attention, the Forgotten Man remains a misunderstood figure. He and his wife, the Forgotten Woman, were created by the acerbic pen of William Graham Sumner, a 19th-century Yale professor and one of the first American sociologists.

Sumner’s essay provides guidance and warning to modern conservatives who want to champion the forgotten.

He is the clean, quiet, virtuous, domestic citizen, who pays his debts and his taxes and is never heard of out of his little circle. … His name never gets into the newspaper except when he gets married or dies.

The Forgotten Man takes precautions, saves (even if he earns little), avoids excess, and does not make himself a burden on society.

1. Be chary of charitable feelings.

Sumner, who was a social Darwinist, decried the influence of sentimentality upon public policy by means of the printing press. Just imagine if he had lived to see Instagram. “It may shock you to hear me say it,” writes Sumner, “but when you get over the shock, it will do you good to think of it: A drunkard in the gutter is just where he ought to be.” The cost of the policeman who interferes to “save the drunkard from himself” is borne by the wages of the Forgotten Man.

Although most conservatives will reject Sumner’s extreme libertarianism (he even dislikes private charity), the basic truth still stands: The cost of social insurance falls on “the industrious workman going home from a hard day’s work,” and the benefit goes to the prodigal son.

As early as 1883, Sumner could write, “each party takes turns, according as it is in or out, supporting or denouncing the non-interference theory.” The party in power always found something it wanted to regulate.

Regulation, he argues, benefits those it restrains, “reliev[ing] negligent people of the consequences of their negligence.” By contrast, the Forgotten Man, “if let alone, would make a reasonable use of his liberty without abusing it.”

Even worse, regulation and social programs deprive citizens of “the true education in freedom which is needed to support free institutions” and maintain free, democratic government. Government regulations have hurt the coal mining industry in states like West Virginia, where these miners came out in support of Donald Trump. (Photo: Chris Tilley/Reuters/Newscom)

When legislation is passed to benefit some subset of society, the Forgotten Man is left to pick up the tab.

What a modern economic textbook would call “rent-seeking,” Sumner calls “jobbery.” He continues: “The biggest job of all is the protective tariff,” which was imposed on foreign commodities, including thread. Sumner shows how this proud industrial policy pushed the Forgotten Woman deeper into poverty.

When you go to Willimantic, they will show you with great pride the splendid thread mills there. … If a [sewing] woman earns 50 cents in 12 hours … she works a quarter of an hour per day to support the Willimantic linen company, which in 1882 paid 95 per cent dividend to its stockholders. If you go and look at the mill, it will captivate your imagination until you remember all the women in all the garrets, and all the artisans’ and laborers’ wives and children who are spending their hours of labor, not to get goods which they need, but to pay for the industrial system.

Finally, Sumner’s warning: We too readily allow exciting and novel causes to guide our decision-making.

Whenever a pestilence like yellow fever breaks out in any city, our attention is especially attracted towards it, and our sympathies are excited for the sufferers. If contributions are called for, we readily respond. Yet the number of persons who die prematurely from consumption every year greatly exceeds the deaths from yellow fever or any similar disease when it occurs, and the suffering entailed by consumption is very much greater.

The virtuous and prudent Forgotten Man does not allow himself to be taken in by the hype, and he always wears his seatbelt.

Perhaps Sumner never imagined that we would elect a president who would explicitly appeal to the Forgotten Man. But two presidents have done so—before Trump, President Franklin Delano Roosevelt called his policies a plan for the “forgotten man at the bottom of the economic pyramid.” But, as Shlaes’ book details, Roosevelt proceeded to violate every tenet of Sumner’s essay.

The Forgotten Man gets a second chance now, with a new president as his champion. Time will tell if he’s finally been remembered.