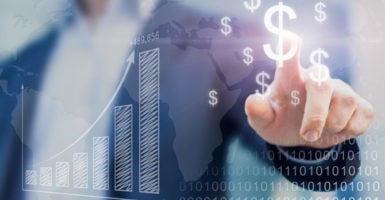 The U.S. national debt is soon to reach $20 trillion—an increase of over $14 trillion since 2000. (Photo: iStock Photos)

America is facing a looming budget crisis, but you wouldn’t know it from the way Congress keeps spending.

By 2027, net interest on the national debt will cost the American people $768 billion, Social Security and health care spending will consume 59 percent of the entire budget, and Obamacare will have cost taxpayers nearly $1 trillion.

No, these aren’t doomsday prophecies. These are actual projections from the Congressional Budget Office’s latest 10-year budget projection.

Twice a year, the Congressional Budget Office updates its annual “Budget and Economic Outlook.” This report projects the nation’s fiscal conditions for the next 10 years based on current laws.

Massive government spending drives budget deficits and the national debt. In 2016, federal spending reached 20.9 percent of the economy and is projected to grow even larger in 2017. By 2027, federal spending will be nearly 23.5 percent of gross domestic product. At the same time, revenues remain above historic averages. Clearly, Congress has a spending, not a revenue, problem. The U.S. debt is steadily approaching $20 trillion. In the next few weeks, our debt will exceed the combined 2016 economic output of India, the United Kingdom, Japan, Germany, Canada, Brazil, Australia, Taiwan, and Thailand. Of this debt, a staggering $14.1 trillion was held by the public in 2016. 3. The interest on the debt. By 2027, these programs will consume $2.2 trillion. Over the next 10 years, Obamacare will be responsible for nearly $1 trillion in additional health care spending. 6. Structural problems in the federal budget.

Between 2016 and 2027, the Congressional Budget Office projects that federal spending as a whole will increase by $2.8 trillion. Just three major budget categories—health care, Social Security, and interest on the national debt—will be responsible for 83 percent of this spending growth. Ever wonder where the government gets all of its money? In 2016, American taxpayers funded nearly 50 percent of federal revenues through the individual income tax. Payroll taxes covered another 34 percent of government revenues, while corporate income taxes and other revenues brought in 19 percent of all revenues. 8. Health care in the federal budget. Without structural reform, these drivers of debt will continue to spiral out of control and eventually lead the U.S. to a budget crisis. To prevent that scenario, Congress should take preemptive measures now while it has the opportunity to do so.