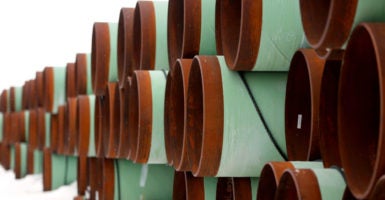 The Dakota Access pipeline will deliver 570,000 barrels of oil a day from North Dakota to existing pipelines in Illinois. (Photo: Terray Sylvester /Reuters/Newscom) 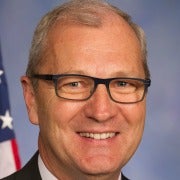 The final easement granted on Wednesday by the U.S. Army Corps of Engineers to complete the Dakota Access pipeline project sent a clear signal to our nation: Infrastructure development is once again a priority.

Four days after his inauguration, the president signed an executive order for expedited approval of the Dakota Access pipeline easement. Two weeks later, the easement has been granted.

This stands in stark contrast to the actions of President Barack Obama, whose disregard for the rule of law last fall halted the completion of the legally permitted Dakota Access pipeline.

This sent a chilling message to the private industries that finance, develop, and complete all required regulatory reviews to build roads, bridges, transmission lines, pipelines, wind farms, and water lines.

The message was that when top government officials and lawless mobs decide to obstruct a legally permitted pipeline project that is more than 90 percent complete, no infrastructure project is safe.

Few people outside North Dakota can comprehend the chaos this conflict brought to my state. It became a cause célèbre, bringing thousands of political activists, anti-oil extremists, and movie stars to an area south of Bismarck where they illegally camped on federal land.

Except for a few hundred still in the area, these protesters are mostly gone.

Yet today, the nearby Standing Rock Sioux members and state and county crews are feverishly cleaning up the mess of personal belongings, trash, and human waste they left behind—an estimated 250 truckloads that must be hauled to the Bismarck landfill.

They are hoping to beat next month’s spring thaw on the floodplain where they camped, so that the trash left behind by these “water protectors” doesn’t pollute the Missouri River.

There is a poignant and absurd irony about this situation. Those claiming to be the true protectors of land and water turned out to be the only threat to the environment.

With the easement to finish the Dakota Access pipeline now granted, it’s time to get to work and finish this $3.7 billion private project that will deliver as many as 570,000 barrels of oil a day from northwestern North Dakota through South Dakota and Iowa to connect to existing pipelines in Illinois.

This important piece of energy infrastructure will enhance America’s energy security and put Americans back to work.

I am grateful for the president’s commitment to projects like this that are so vital to our nation.

It sends a strong signal of a new era of cooperation between the federal government and private businesses that are committed to moving our nation forward with new critical infrastructure creating greater job opportunities for Americans.