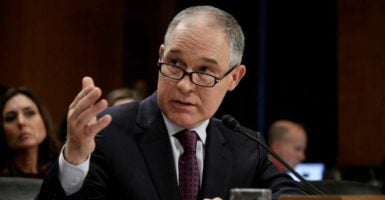 About 30 employees at the EPA’s Chicago office joined a protest organized by the Sierra Club and the American Federation of Government Employees to protest Oklahoma Attorney General Scott Pruitt’s nomination as the EPA chief. (Photo: Joshua Roberts /REUTERS/Newscom)

Around 30 employees at the EPA’s Chicago office joined a protest organized by the Sierra Club and the American Federation of Government Employees to protest Oklahoma Attorney General Scott Pruitt’s nomination. They argue that Pruitt, a critic of the agency’s Clean Power Plan, will lay waste to the EPA’s ability to confront companies that violate the law.

Trump’s policies will wallow out the EPA and make it harder to punish lawbreakers, Sherry Estes, an EPA lawyer who participated in the protest, told reporters Monday during the demonstrations.

“The EPA needs to be able to enforce the rules when companies are breaking the law,” she said.

The Trump administration appeared to take the protests in stride. Doug Ericksen, a spokesman for Trump’s transition team at the EPA, dismissed the protests. He said that “employees have a right to take action on their private time.”

The protests were part of an all-out assault Monday by current and former EPA employees against the Trump administration. Over 400 former EPA staff members sent a letter to the Senate pressuring it to reject Pruitt, saying “he has shown no interest in enforcing environmental laws.”

Pruitt has a history of siding with industry and has been reluctant to accept “the strong scientific consensus on climate change,” they wrote.

The Senate Committee on Environment and Public Works approved Pruitt Thursday over the objections of the panel’s Democratic members. The Oklahoma Republican is expected to be confirmed by the full Senate, but a date for the vote has not been set.

Pruitt received, and answered, more than 1,000 questions during his hearing in January—Democrats say his answers related to conflicts of interest and his record as an attorney general are insufficient.

Trump, for his part, once called global warming a “hoax” created by China to hurt American business; he made axing what he called unnecessary environmental regulations a cog in his presidential campaign. He especially wanted to target rules affecting so-called Coal Country, where Obama’s Clean Power Plan contributed to the shuttering of several coal power plants.