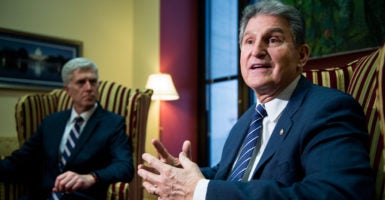 “The focus is to put pressure on Democratic senators to decide between following the will of American people and the voters in their state or to follow Sen. Chuck Schumer and the radical left down a path of obstructionism,” Judicial Crisis Network senior adviser Gary Marx told The Daily Signal.

The Judicial Crisis Network and Heritage Action for America have both launched campaigns to bolster the confirmation of Judge Neil Gorsuch to the U.S. Supreme Court. Gorsuch, currently a judge on the U.S. Court of Appeals for the 10th Circuit, was nominated by Trump to fill the seat of the late Antonin Scalia.

Judicial Crisis Network has formed a coalition enterprise to engage in a $10 million campaign of television and digital advertising, research, and grassroots activism. The group claims this is the “most robust operation in the history of confirmation battles.”

Judicial Crisis Network and Heritage Action are targeting Democrat senators from states that Trump won in the 2016 presidential election. Judicial Confirmation Network is also focusing on Colorado, which is Gorsuch’s home state, while Heritage Action has Minnesota, a state Trump narrowly lost, on its list.

“Any vulnerable senator who signs up for Schumer’s obstructionist strategy will pay a heavy price,” said Carrie Severino, chief counsel and policy director of the Judicial Crisis Network. “Exit polls showed that over one-fifth of voters said the Supreme Court was a primary reason for their vote, and of that large percentage of Americans, Trump won those voters by a resounding 57-40 margin.”

In a phone interview with The Daily Signal, Severino noted that the group’s pro-Gorsuch campaign is about holding senators accountable to their constituents.

Before Gorsuch was nominated, Schumer, the Senate Democrat leader from New York, said in an MSNBC interview, “We are not going to settle on a Supreme Court nominee. If they don’t appoint someone who is really good, we are going to oppose them tooth and nail.”

Judicial Crisis Network also launched a new pro-Gorsuch ad, which began airing on Friday in Montana, Indiana, North Dakota, Colorado, and the District of Columbia, according to a press release. This ad is part of the over $2 million initial advertising buy that started on Tuesday night after Gorsuch was nominated. The campaign is part of the organization’s $10 million overall effort.

Heritage Action’s campaign also targets senators in 10 states where Trump won, although it also targets Klobuchar of Minnesota rather than Stabenow. The group, a sister organization of The Heritage Foundation, asks its support to call these senators and ask for a swift confirmation. It also encourages senators to promptly carry out their constitutional role of “advise and consent.”