In Photos, the Latest Example of Liberal ‘Tolerance’ 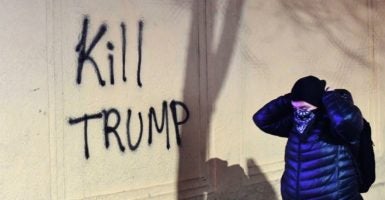 The violence was instigated by a group of about 150 masked agitators who came onto campus and interrupted an otherwise non-violent protest.

The decision to cancel the event was made at about 6 p.m., and officers read several dispersal announcements to a crowd of more than 1,500 protesters who had gathered outside the student union, where Yiannopoulos was to speak. …

Fires that were deliberately set, one outside the campus Amazon outlet; Molotov cocktails that caused generator-powered spotlights to catch fire; commercial-grade fireworks thrown at police officers; barricades pushed into windows and skirmishes within the crowd were among the evening’s violent acts.

The masked agitators came to campus eastbound on Bancroft Way, and fire damage and other destruction to the Stiles Hall construction site, where a new residence hall is planned, was reported. The group entered campus and immediately began throwing rocks at officers. In an effort to avoid injuries to innocent members of the surrounding crowd who might have been caught in the middle, police officers exercised restraint and did not respond with force.

Agitators also attacked some members of the crowd who were rescued by police. UCPD reported no major injuries and about a half dozen minor injuries. Mutual aid officers from the city of Oakland and from Alameda County arrived at Berkeley around 7:45 p.m. to assist UCPD and Berkeley city police.

Just try to imagine the reaction if this had occurred at, say, Hillsdale College if Lena Dunham had come to speak.

Yes, it’s true that most liberals wouldn’t act like this—and it’s not clear who the “masked agitators” were. (Although again: How many on the left would use those caveats if this happened in the hypothetical Dunham speech at Hillsdale?)

And to UC Berkeley’s credit, the statement continued, “Campus officials added that they regret that the threats and unlawful actions of a few have interfered with the exercise of First Amendment rights on a campus that is proud of its history and legacy as the home of the Free Speech Movement.”

(Although—it does seem strange that when protesters threw rocks, attacked crowd members, pushed barricades into windows, etc., etc., no one was arrested.)

Here are photos of what happened Wednesday night in Berkeley, California:

A light stand is set on fire during protest on the University of California, Berkeley campus against Milo Yiannopoulos. (Photo: Jeremy Breningstall/ZUMA Press/Newscom) Rioters smash windows at a T-Mobile store during a protest against Yiannopoulos. (Photo: Noah Berger/EPA/Newscom)

Protests against Milo at UC Berkeley. Protesters chanting “This is what community looks like.” pic.twitter.com/a0YIZ3epIc Rioters loot and vandalize a Starbucks during a protest against Yiannopoulos. (Photo: Noah Berger/EPA/Newscom) A worker surveys the damage to a vandalized Starbucks after the protest. (Photo: Stephen Lam/Reuters/Newscom) A vandalized Bank of America office is seen after a protest turned violent at UC Berkeley during a demonstration over Yiannopoulos. (Photo: Stephen Lam/Reuters/Newscom)

In the 20 years I’ve lived in the Bay, I’ve never seen in go down like this in Berkeley. We’re living in a new country now. pic.twitter.com/iN2xMHuVsQ A rioter smashes a window at a Mechanics Bank branch. (Photo: Noah Berger/EPA/Newscom) THE MILO EFFECT: When a gay conservative shows up at Berkeley, the left goes berserk https://t.co/hB9hGa87pR Eddy Brock, who says he is a free speech advocate who was attacked by demonstrators protesting against Yiannopoulos, holds his head. (Photo: Noah Berger/EPA/Newscom)