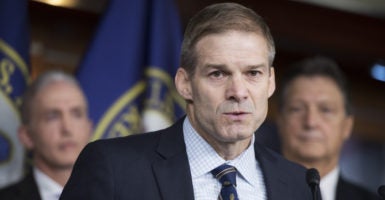 Reps. Jim Jordan, pictured, and Mark Meadows are calling on GOP leaders to allow Republicans to vote on a 2015 bill that repeals major provisions of Obamacare and strips Planned Parenthood of its federal funding. (Photo: Tom Williams/CQ Roll Call/Newscom)

Two prominent House conservatives are calling on Republican leadership to bring a 2015 bill repealing major parts of Obamacare before members for a vote “as soon as possible.”

In a statement Thursday, Reps. Jim Jordan of Ohio and Mark Meadows of North Carolina pushed GOP leaders to bring the legislation unwinding major provisions of the Affordable Care Act and defunding Planned Parenthood to the floor for a vote.

The bill passed both the House and the Senate in 2016, but President Barack Obama vetoed the legislation when it arrived on his desk.

“There’s no reason we should put anything less on President [Donald] Trump’s desk than we put on President Obama’s now that we know it will be signed into law,” Jordan and Meadows said.

Republicans used a budget tool called reconciliation to pass the bill crafted in 2015, which fast-tracked the repeal legislation through the Senate and allowed it to pass with a simple majority of 51 votes.

The bill repealed the individual and employer mandates; the Cadillac, medical device, and other taxes; and Medicaid expansion. It also removed the government’s authority to run the exchanges, and lessened the fine for not complying with the individual mandate to $0.

The legislation also stripped Planned Parenthood of its federal funding.

Jordan and Meadows are both leaders in the House Freedom Caucus, a group of roughly 40 conservatives. Jordan formerly served as its chairman, and Meadows currently leads the group.

The Republican congressmen have been calling for Obamacare’s repeal for years and believe the issue was one that contributed significantly to Republican victories in 2012, when Meadows was elected, and 2014.

Now, with Trump in office, GOP lawmakers have an executive in the White House who has said he supports Obamacare’s repeal.

Republicans passed a budget resolution last month that began the initial steps of reconciliation, which lawmakers will use once more to repeal Obamacare. The budget document instructed House and Senate committees to begin drafting the legislation to dismantle the health care law.

But GOP lawmakers aren’t yet in agreement over what specific parts of the Affordable Care Act to undo, and some are even backing away from their initial calls for repeal.

Conservatives like Jordan and Meadows want to see Republicans unwind as much of Obamacare as possible, including its taxes and insurance mandates.

“Health care will be better and more affordable once Obamacare is repealed,” the duo said in their statement. “We committed to the American people to repeal every tax, every mandate, the regulations, and to defund Planned Parenthood.”

But Jordan and Meadows are at odds with other Republicans like Sens. Bill Cassidy of Louisiana and Susan Collins of Maine who have advocated that lawmakers hold off on repealing the taxes for a few months.

Additionally, conservatives are frustrated with the timeline for Obamacare’s repeal laid out by House Speaker Paul Ryan at a joint retreat for House and Senate Republicans last week.

Ryan, R-Wis., said Congress would vote to dismantle the law and implement parts of a replacement by the spring.