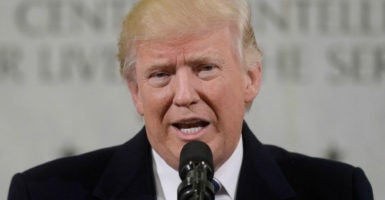 Mitch McConnell on President Trump's pending Supreme Court nominee: "I consistently maintained that the next president would fill this vacancy. I held to that view even when nearly everyone thought the president would be Hillary Clinton." (Photo: Olivier Douliery/UPI/Newscom) 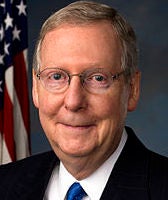 Justice Antonin Scalia was a towering figure on the Supreme Court.

His unfortunate passing last year was not only a great loss to our country, but it came, as we all know, as our country was already in the midst of a contentious presidential election process.

In keeping with the Biden Rule, which states that “ … action on a Supreme Court nomination must be put off until after the election campaign is over, ” I have stood firm on the principle that the American people should have a voice in the selection of their next Supreme Court justice.

Our friends on the left may lack the same consistency on this topic—the principle we’ve followed, after all, is not only known as the Biden Rule but also the Schumer Standard—but there is one thing from which we can expect the left not to waver: trying to paint whomever is actually nominated in apocalyptic terms.

When the Republican president was George H.W. Bush, groups on the left said the record of his first Supreme Court nominee was ”disturbing” and ”very troubling” and that his opinions ”threaten to undo the advances made by women, minorities, dissenters, and other disadvantaged groups.”

When the Republican president was Ronald Reagan, groups on the left also said that the record of one of his nominees was ”troubling.” They even called him a ”sexist” and said he ”would be a disaster for women” if confirmed.

The nominee in question? Anthony Kennedy.

And when the Republican president was Gerald Ford, the left said that they had “grave concern” with his Supreme Court nominee and that the record of this nominee “revealed an extraordinary lack of sensitivity to the problems women face … ” In fact, they said he was “disqualified from being a member of the Supreme Court of the United States because of his consistent opposition to women’s rights … ”

The nominee they were referring to? John Paul Stevens.

I’m serious—that’s what they said about Stevens. And Souter. And Kennedy.

We can expect to hear a lot of end times rhetoric from the left again today. In fact, we already have. The same groups on the left who always seem to say the sky is falling when a Republican president puts forward a Supreme Court nominee are saying it’s falling again.

Only this time, they’re saying it before we even have a nominee.

President Donald Trump has a list of about 20 Americans who he is considering nominating to the Supreme Court. These men and women have different professional backgrounds and different life experiences.

The bipartisan support, the years of judicial experience, the impressive credentials—none of these appear to matter to some on the left. They say things like, “We are prepared to oppose every name on the list.”

That’s right, Mr. President. Every single name on the list.

Even more troubling, some Senate Democrats are saying the same thing. My friend from New York said it was hard for him “to imagine a nominee” from Trump whom Senate Democrats “could support.”

We don’t even have one yet.

I hope we can all skip past that and get down to our serious work. The election is now behind us. The president has been working to make his decision on a nominee, and we expect him to announce that decision tomorrow.

We have every right to expect the same courtesy from today’s minority when we receive this nomination.