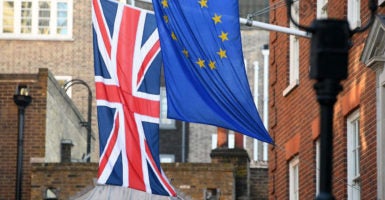 The Supreme Court's judgment reaffirms a lower court decision that Parliament must be allowed a vote before the government invokes Article 50. (Photo: Facundo Arrizabalaga /EPA/Newscom)

Today, Britain’s Supreme Court ruled that Parliament must be allowed a vote before the British government initiates Brexit.

This ruling will not derail the Brexit process. It will, however, mean that Parliament must approve the triggering of Article 50 of the Lisbon Treaty, which formally begins the two-year process by which Britain withdraws from the European Union.

The British government had appealed an earlier judgement by the high court that ruled that Parliament must have a say over invoking Article 50. But by a margin of 8 votes to 3, the Supreme Court justices sided with the high court.

Significantly, the Supreme Court ruling also declared that “[this] case has nothing to do with issues such as the wisdom of the decision to withdraw from the European Union, the terms of withdrawal, the timetable or arrangements for withdrawal, or the details of any future relationship with the European Union.”

The ruling also rejected any right of veto by devolved legislatures, such as the Scottish Parliament.

In the words of the court’s ruling: “The devolved authorities have no competence to deal with [European Union] treaties independently of the U.K. government. Therefore they have no power of veto on triggering Brexit.”

Last June, the British people voted by 52 percent to 48 percent to leave the European Union in a historic referendum with a turnout of over 72 percent.

In accord with the referendum, British Prime Minister Theresa May has announced her government’s intention to invoke Article 50 by March 31, 2017. Britain would formally exit the European Union by May 2019.

The British government is expected within days to introduce legislation to trigger Article 50, which will be debated by both the House of Commons and the House of Lords.

Although the Conservative government’s working majority in the Commons is small, at just 16 MPs, the leadership of the opposition Labour Party has pledged not to stand in the way of the triggering of Article 50, while it may seek to amend the legislation.

In response to today’s ruling, Britain’s secretary of state for exiting the European Union, David Davis, stated in the House of Commons that there is no going back on Brexit, and that the will of the British people will not be thwarted.

The Brexit vote was an emphatic rejection of European Union membership and a powerful rallying cry for British sovereignty and self-determination. In just over two years from now, Britain will once again be a truly free, sovereign nation, with the right to control its own borders, fully decide its own laws, and shape its own destiny.

Brexit will advance Britain’s freedom and prosperity, and will also strengthen the Anglo-American special relationship, with a free trade agreement with the United States at its heart.