How Many Will Be Affected by Trump’s Government Hiring Freeze 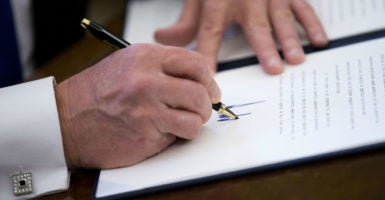 President Donald Trump signed a memorandum to all heads of executive departments and agencies, directing them to refrain from filling any positions that remained open as of noon on Jan. 22. (Photo: Shawn Thew/SIPA/Newscom)

Trump made it clear in his inaugural address that he thinks the federal government is doing a lousy job of fulfilling its primary purpose of serving the American people.

So why not press the pause button and allow more time to evaluate the needs and priorities of the federal agencies before filling empty positions?

The freeze came in the form of a memorandum to all heads of executive branch departments and agencies, directing them to refrain from filling any positions that remained open as of noon on Jan. 22. It also directed them not to create any new positions, nor to “contract outside the government to circumvent the intent of [the] memorandum.”

The memo exempts the military, as well as positions deemed necessary to meet national security or public safety needs, and it allows the director of the Office of Personnel Management to provide special exemptions as necessary.

Because the memo only excludes those positions vacant at noon on Jan. 22, positions that are vacated after Jan. 22 can presumably be filled.

The freeze is not so much about cutting the number of employees and reducing federal spending as it is about right-sizing the federal government and making the best use of taxpayer dollars.

It is particularly important for the federal government to be cautious in hiring new workers because federal managers don’t have the same freedom as private employers to fire employees for poor performance or misconduct.

Firing a federal employee is a lengthy, burdensome, and costly process that takes a year and a half on average to complete.

Within 90 days, the director of the Office of Management and Budget, Trump’s nominee is Rep. Mick Mulvaney, R-S.C., is to “recommend a long-term plan to reduce the size of the federal government’s workforce through attrition.”

The hiring freeze will expire once that long-term plan is set in motion.

Despite criticism from public employees unions over this hiring freeze, the president’s memo will have little effect on the roughly 2 million current executive branch federal employees who will remain in their jobs.

It will only affect would-be federal employees who may have come on board over the next few months.

So how many would-be federal employees could be affected?

Recent data from the Office of Personnel Management suggests an upward bound of about 40,000 potentially affected employees, but that would include some exempt safety and security positions, as well as positions vacated after Jan. 22 (which it appears the agencies can fill).

It also would not account for the relatively low number of vacancies that presumably existed on Jan. 22, as agencies rushed to fill vacant positions in anticipation of Trump’s planned hiring freeze.

At the end of the day, the freeze is likely to impact a relatively small number of people—probably 10,000 to 20,000 individuals who will either not enter federal jobs they might otherwise have obtained, or who will be delayed in entering those jobs.

This compares to total federal employment of about 4 million civilian and military workers.

The biggest impact will not be the initial freeze, but rather the policies that ensue afterward as Trump seeks to implement a right-sized, more limited and efficient federal government with a mission to serve its people.

Along those lines, the memo seeks greater flexibility to make the most of taxpayer dollars.

It directs department and agency heads to “seek efficient use of existing personnel and funds to improve public services and the delivery of these services,” including any necessary reallocations “to meet the highest priority needs and to ensure that essential services are not interrupted and national security is not affected.”

Trump’s memorandum suggests that the business of government will not continue as usual under his administration.

This will likely mean some duplicative and wasteful services and positions will be eliminated, some functions will be transferred from the federal government to state and local governments or the private sector, and greater emphasis will be given to increasing the government’s productivity and not wasting taxpayer dollars.

This should be welcome news for taxpayers who want to see changes in the way the federal government operates.