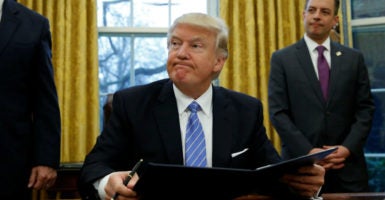 In one of his first official actions, President Donald Trump reinstated the life-affirming Mexico City policy, ensuring that American taxpayers do not fund international organizations that perform or promote abortion overseas.

The news comes just after the 44th anniversary of Roe v. Wade, which legalized abortion on demand across the country.

Pro-life Americans are undoubtedly encouraged by Trump’s actions, not because reinstating the Mexico City policy was a particularly heavy lift, but because they see this as the first sign of the new administration’s commitment to protect life.

Ronald Reagan first announced this policy at the second U.N. International Conference on Population in Mexico City (hence the name) back in August of 1984.

Since then, the policy has been enforced by every Republican president and suspended by every Democratic president shortly after being inaugurated. Bill Clinton rescinded the policy on Jan. 22, 1993; George W. Bush reinstated it on Jan. 22, 2001; and Barack Obama rescinded it again on Jan. 23, 2009.

It is long-standing policy for the United States to prohibit funding abortion in international programs.

The Helms Amendment, first added to the Foreign Assistance Act of 1961 and included in most annual foreign assistance appropriations since 1980, states that no U.S. taxpayer funds “may be used to pay for the performance of abortions as a method of family planning or to motivate or coerce any person to practice abortions.”

Similarly, the Siljander Amendment, also added to most foreign operations appropriations since 1982, states that no taxpayer funds “may be used to lobby for or against abortion.”

The Mexico City policy is a much-needed, complementary protection to policies like the Helms and Siljander amendments, because it ensures that U.S. dollars are not entangled, in any way, in the international abortion industry.

Without the Mexico City policy, groups like the International Planned Parenthood Federation are eligible to receive millions of taxpayer dollars to go to non-abortion-related activity, which frees up money for it to perform or promote abortion abroad.

The Mexico City policy closes this loophole and requires foreign nongovernmental organizations that receive United States Agency for International Development family planning assistance to certify that they will not perform or actively promote abortion as a method of family planning.

In reinstating the Mexico City policy, Trump has demonstrated his commitment to making sure American taxpayers do not subsidize NGOs that do not respect innocent human life.

His administration will have more opportunities to pursue pro-life policies in the weeks and months to come, such as ending taxpayer funding for the abortion industry, signing the Pain-Capable Unborn Child Protection Act, signing the Conscience Protection Act, and much more.

Pro-life Americans know that they have the opportunity of a generation, and today’s news is a hopeful sign of what lies ahead.