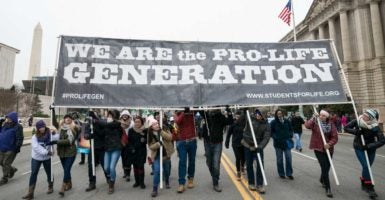 The Marist poll’s numbers, showing the majority of Americans support some sort of restriction on abortion, were released on the same week as the annual March for Life event. (Photo: Albin Lohr-Jones/Sipa USA/Newscom)

A majority of Americans are in favor of stopping taxpayer funding of abortions and banning most abortions after 20 weeks of pregnancy, according to a new Marist poll commissioned by the Knights of Columbus.

“There is a consensus in America in favor of significant abortion restrictions, and this common ground exists across party lines, and even among significant numbers of those who are pro-choice,” Carl A. Anderson, CEO of the Catholic organization Knights of Columbus, said in a statement.

“This poll shows that large percentages of Americans, on both sides of the aisle, are united in their opposition to the status quo as it relates to abortion on demand. This is heartening and can help start a new national conversation on abortion.”

When it came to the partisan breakdown of individuals polled, 41 percent of Democrats and 87 percent of Republicans opposed using taxpayers’ money to fund abortions.

Large majorities of the Marist poll’s respondents supported significant restrictions on abortion, including banning the practice after 20 weeks, unless the mother’s life is in danger.

The poll found that 85 percent of Americans supported some restrictions on abortion.

“It’s also worth pointing out, we have 74 percent of all Americans who support these [significant] restrictions and 77 percent of women who would support these restrictions,” Andrew Walther, the vice president of communications and strategic planning for Knights of Columbus, said in a conference call to reporters.

We’ve been doing this now going back to 2008, asking Americans what kind of restrictions they would support on abortion, and what we found here, as in previous years, was an overwhelming support for limiting abortion to at most the first three months of pregnancy, with substantial support for limiting it to cases of rape, incest, and the life of the mother.

The Marist poll’s numbers, showing the majority of Americans support some sort of restriction on abortion, were released during the same week as the annual March for Life event, an annual pro-life event that meets in the District of Columbia.

Additionally, on Monday, Donald Trump reinstated a policy that specifies that federal funds designated for family planning can only be used to support foreign nongovernmental organizations that will not promote or perform abortions in foreign countries.

The Marist poll sponsored by the Knights of Columbus was conducted between Dec. 12 and Dec. 19, 2016. The survey included responses from 2,729 adults living within the continental United States and has a margin of error of ±1.9 percentage points.