Why Trump Poses a Bigger Threat to the Left Than Reagan, According to Newt Gingrich 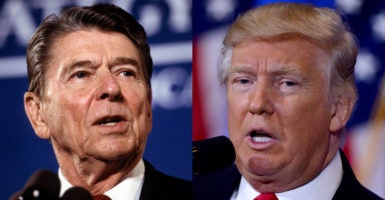 President-elect Donald Trump poses a greater threat to the left than any other political leader in the last 100 years, Newt Gingrich proclaimed on the eve of Inauguration Day.

Speaking at The Heritage Foundation on Thursday, Gingrich predicted that the Trump administration will dismantle the Washington establishment, unlike anything America has ever seen.

“Trump is a direct moral threat to both the value system of the left—because he’s so politically incorrect—and to the power structure of the left,” the former House speaker said.

Trump will put an end to the liberal agenda pushed by the establishment since Franklin Roosevelt, Gingrich predicted.

“I believe it’s an opportunity to end the 84-year dominance of the left starting with Roosevelt in 1932,” Gingrich said. “[Ronald] Reagan didn’t end it, I didn’t end it. It has continued to be the dominant underlying force in American culture and government. We have a chance now to really do that.”

As the media becomes increasingly terrified and the left’s anticipation has risen, Gingrich said, it has become clear to me that there is no historical parallel to Trumpism.

Not even Reagan can serve as a model for a chief executive whose primary goal is to completely alter the current power structure, Gingrich noted.

“Reagan’s goal was to defeat the Soviet empire and, within the context of the traditional system, to accelerate economic growth and rebuild a belief in America and American history,” he said. “He didn’t spend a lot of time trying to take on the core value system of the left.” Trump’s tackling of the left’s ideology is comparable to Margaret Thatcher’s annihilation of socialism in Great Britain during her years as prime minister.

Thatcher assailed socialism, “which is exactly what Trump should do,” Gingrich said. “Thatcher was a direct threat to both the value system and the power structure of the left in Great Britain.”

Gingrich suggested that while Trump may not be an ideological, traditional conservative, he has the ability to not only create jobs and stimulate the economy, but also to overpower the left’s agenda.

“He is not an ideological, traditional conservative, but he may be the most anti-left political leader of the last 100 years,” Gingrich said. “If they come together as a team and if they really focus on large-scale change, this will in fact be a historic opportunity. Former House Speaker Newt Gingrich is delivering a series of talks on Trumpism at The Heritage Foundation in January. (Photo: Willis Bretz for The Daily Signal)

Gingrich urged Trump voters to be both “noisily supported” of the administration and heavily critical of the elite news media.

“Every time the news media does something wrong, scream at them,” he said. “Just pound on them. Don’t pretend that we should pay attention to them in a positive way.”

Gingrich will pick up with part four of his six-part series on understanding Trump and Trumpism at Heritage on Monday, Jan. 23. The speech will take place at 11 a.m. EST.