Scott Pruitt Provides an Opportunity to Rein in a Rogue EPA 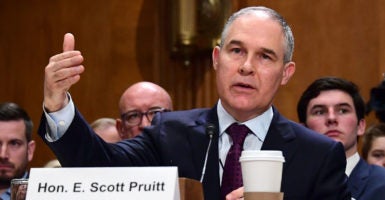 Protesters with megaphones are making a lot of noise over the confirmation of Oklahoma Attorney General Scott Pruitt to lead the Environmental Protection Agency.

But Pruitt and others concerned about an agency that has grossly exceeded its statutory authority and threatened individual liberty are giving a bigger megaphone to voices all over the country that need to be heard.

They’re providing a voice to the family the EPA fined $75,000 per day for placing gravel on virtually dry land. They’re standing up for the farmers (like this cranberry farmer), ranchers, and homebuilders worried about the authority seized by the EPA in the Waters of the United States rule, which could destroy their way of life.

And they’re aiming to protect the small businesses and families across the country facing higher energy bills as a result of global warming regulations on the country’s power fleet.

Unfortunately, there are plenty of stories to pull from.

Now, environmental activists want you to believe those are necessary to prevent higher asthma rates, more smog, and allowing big businesses to willingly pollute. The left has bought into the notion that a strict choice exists between economic activity and the environment.

But that’s a false choice.

Several senators attacked Pruitt on mercury, claiming he should be more concerned about mercury emission reductions, largely because of his opposition to the Obama EPA’s mercury air and toxics regulation on power plants.

But let’s put this opposition into context.

By its own estimation, the EPA said the mercury regulation for power plants could cost $9.6 billion annually. But the agency justified that cost saying the health benefits would range from $37 billion to $90 billion per year.

Sounds like a no-brainer. But upon closer inspection, the monetary benefits from the mercury reduction are a paltry $4 million to $6 million per year.

Exploitation of co-benefits allows the EPA to justify rules when costs greatly exceed benefits. We should welcome an end to such regulatory abuse.

And in fact, the Supreme Court agreed.

In June 2015, the Supreme Court struck down the EPA’s Mercury and Air Toxics Standards (MATS) to regulate mercury emissions from coal and oil-fired power plants. The court said the agency improperly ignored the costs when promulgating the regulation.

The problem, however, is that the court’s decision was symbolic because states had already gone down the irreversible, costly path that closed power plants and destroyed jobs.

The regulation was not a choice of environment at the expense of jobs. It was just a jobs killer with nothing in return.

Pruitt’s opponents painted him as a climate denier, despite the fact he’s never actually denied the science behind man-made warming. The reality is climatologists have a wide range of theories as to the magnitude of warming, the causes, man-made emissions’ impact on warming, and the rate of future warming and reliability of climate models to predict centuries into the future.

Despite claims from senators that the planet is experiencing more frequent and intense natural disasters, the data show no trends for extreme weather events. And despite fearmongering about sea level increases that would flood coastal cities, the current rate of sea level rise lies far beneath alarmist projections.

Pruitt led the opposition to the EPA’s climate change regulations because they would impose significant economic costs while making no significant impact on global temperature change. And as attorney general, he sued the agency because the EPA’s expansion of authority went well beyond its statutory limits.

Yet, somehow that makes him a denier.

Unsurprisingly, the critics of Pruitt questioned his ability to lead an agency he has sued as a state attorney general. But as attorney general, that’s exactly what he is supposed to do: protect his state from overreach when the EPA does not comply with the law.

And he wasn’t the only one. Twenty-seven states sued the Obama administration over the Clean Power Plan global warming regulations, and similarly, 27 states sued over the EPA’s Waters of the United States regulation that is a massive threat to private property rights.

If you’ve heard anything from the activists protesting Pruitt’s nomination, you’d think he’s going to lead the United States on a path to the air and water quality of China. But the truth is that Pruitt has an opportunity to lead a responsible EPA, not an overzealous one like it is today.

An EPA that respects the rule of law, protects private property rights, and shifts environmental responsibility from the federal government to the states to better customize policies for local interests will yield greater economic and environmental results. There’s no denying that.