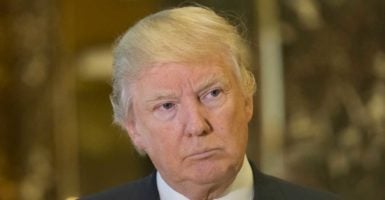 Former House Speaker Newt Gingrich spoke Tuesday at the third of a six-part series on understanding Donald Trump, pictured above, and Trumpism at The Heritage Foundation. (Photo: UPI/Newscom)

Speaking Tuesday at The Heritage Foundation for the third of a six-part series on understanding Trump and Trumpism, Gingrich explained what a “Trumpian balanced budget” would look like.

According to Gingrich, what makes both Trump and Trumpism captivating is that balancing the budget was not the focal point of the campaign. However, his emphasis on improving the lives of Americans, creating jobs, and reducing spending suggests that a balanced budget is realistic.

The Washington Examiner reported Tuesday that Trump had asked his incoming team to make budget cuts of 10 percent in some departments, while trimming government staff up to 20 percent.

“While Trump’s primary issue was not balancing the budget, he did, however, focus on making America great again,” Gingrich said.

Gingrich, who played an integral role in balancing the federal budget during the Clinton administration, provided Trump and his team with the same insights that made a balanced budget possible in the 1990s.

Addressing wide criticism that the federal budget cannot be balanced, Gingrich said that it can, and the Trump administration will do it.

“We balanced the budget in modern times. It’s not a theory, it’s a historic fact,” he said. “We do know how to do this because we’ve done it.”

Following his speech, Gingrich told The Daily Signal that Trump’s ambitious agenda within the first week will surprise many.

“I would say by one week after the inaugural, it will be very interesting to look at how many things have changed,” Gingrich said.

He added that Trump can achieve his goals by creating jobs, controlling bureaucracy in Washington, D.C., limiting federal spending, and increasing revenue through economic growth.

“He’ll get there by his policies working, not by talking about a balanced budget,” Gingrich noted.

Gingrich listed several ways that Trump can balance the budget. They include shifting from a  regulatory system based on output not input, reversing President Barack Obama’s war on private education, liberating patients and doctors from red tape, and overhauling the intelligence community.

While Trump’s primary goal may focus more on his top-tier issues, Gingrich said the consequences of those policies will lead to a prosperous America through a balanced budget.

“All of these policies help with shrinking the deficit and balancing the budget,” he said. “My argument is that Trumpism produces a balanced budget largely as a consequence of its policies rather than by focusing on the balance itself.”

Gingrich will continue part four of his six-part series on Trumpism at Heritage on Monday, Jan. 23. The speech will take place at 11 a.m. EST.