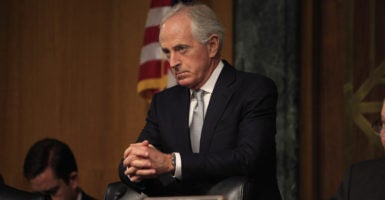 Republican Sens. Bob Corker of Tennessee and Rob Portman of Ohio withdrew their amendment to delay the reconciliation bill that will repeal Obamacare by more than a month. (Photo: Dennis Brack/Newscom)

A group of Republican senators looking to delay the bill repealing Obamacare withdrew their request to do so Wednesday night, a significant move that brings Congress one step closer to dismantling the health care law.

Republican Sens. Bob Corker of Tennessee, Rob Portman of Ohio, Lisa Murkowski of Alaska, Susan Collins of Maine, and Bill Cassidy of Louisiana introduced an amendment to the budget resolution Monday pushing back the deadline for House and Senate committees to craft the reconciliation bill repealing Obamacare to March 3.

The original target date for the committees was Jan. 27.

But during a marathon voting session—called “vote-a-rama”—that began Wednesday evening and extended into early Thursday morning, Portman and Corker withdrew the amendment.

“We plan to withdraw this amendment and place our faith in the fact that we’re going to do this in a manner that works well for the American people,” Corker said.

At the end of the voting session, the Senate passed the budget resolution 51-48, which begins the process of repealing Obamacare using reconciliation.

Congrats to the Senate for taking the first step to #RepealObamacare– now it's onto the House!

Kudos to Senate for taking first step to repeal/replace ObamaCare. Now it's the House's turn to get job done. #PromiseKeepingBusiness #MAGA

The budget resolution instructs the committees with jurisdiction over Obamacare—two in the House and two in the Senate—to begin writing the reconciliation bill that will dismantle the health care law.

Reconciliation is a budget tool that fast-tracks legislation in the Senate.

The House is expected to vote on the budget resolution Friday.

With the Jan. 27 reporting deadline remaining, the pressure is on the Senate to move the reconciliation bill quickly once it passes the House, which is expected to vote on the legislation first.

Congressional Republicans attempted to repeal Obamacare using reconciliation in 2015, when they sent a bill to President Barack Obama’s desk that repealed major provisions of his signature health care law.

The president vetoed the bill.

GOP lawmakers are expected to use the 2015 reconciliation package as a floor for the legislation crafted by committees in the House and the Senate. That reconciliation bill repealed the individual and employer mandates, Medicaid expansion, and medical device and Cadillac taxes.

Though congressional Republicans, including leadership, support repealing Obamacare through reconciliation, some members expressed concern over dismantling the health care law without having a replacement plan ready.

Corker and Portman said they hoped extending the deadline for the committees would give them more time to draft a plan that has broad GOP support and ease the worries of the Americans who gained coverage under Obamacare.

But Corker said he decided to withdraw the amendment after Republican leadership told him the Jan. 27 deadline outlined in the budget resolution was a “placeholder,” according to Politico.