Obama Calls for End to ‘Corrosive’ Politics After 8 Polarizing Years 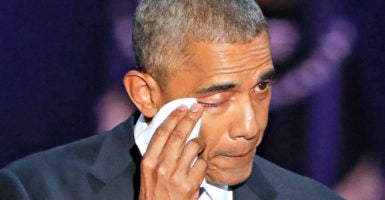 President Barack Obama asserted in his farewell speech that protecting “our democracy” requires putting an end to corrosive politics and addressing income inequality, but polling and economic data show both got worse during his eight years in the White House.

“Our economy doesn’t work as well or grow as fast when a few prosper at the expense of a growing middle class,” @POTUS says.

Speaking Tuesday night in Chicago, where his political career began, Obama talked about a “common purpose” and “solidarity” that is supposed to transcend partisan politics.

“Our founders quarreled and compromised, and expected us to do the same,” he said, “but they knew that democracy does require a basic sense of solidarity, the idea that for all our outward differences, we are all in this together; that we rise or fall as one. There have been moments throughout our history that threatened to rupture that solidarity. The beginning of this century has been one of those times.”

Obama cited President George Washington’s reference, in his own farewell address in 1796, to “sacred ties” for the country.

“We weaken those ties when we allow our political dialogue to become so corrosive that people of good character are turned off from public service; so coarse with rancor that Americans with whom we disagree are not just misguided, but somehow malevolent,” Obama said.

Obama’s call for unity Tuesday night comes after a poll last month that found 72 percent of Americans agreed the country is either more divided or no more united than it was in 2009, when Obama came into office.

The poll by the Associated Press and NORC Center for Public Affairs Research found that only 27 percent agreed Obama has made the country more united.

In a campaign speech just days before he defeated Sen. John McCain, R-Ariz., in the 2008 election, Obama said: “In one week, we can choose hope over fear, unity over division, the promise of change over the power of the status quo. In one week, we can come together as one nation, and one people, and once more choose our better history.”

But Obama has not led the way with high-minded dialogue, critics say.

He once accused Republicans of having a plan to create “dirtier air, dirtier water,” for instance, and said Republican opponents of the Iran nuclear deal found “common cause” with hard liners in the Islamic regime.

A Pew Research Center poll from October showed Obama on track to be the most polarizing president in the past 65 years, going back to Dwight Eisenhower.

Obama heralded a growing economy and a growing number of Americans with health insurance because of his signature legislative achievement, Obamacare. However, the president also objected to income inequality, which critics say has gotten worse because of his policies. He said:

Our economy doesn’t work as well or grow as fast when a few prosper at the expense of a growing middle class, but stark inequality is also corrosive to our democratic principles. While the top 1 percent has amassed a bigger share of wealth and income, too many families, in inner cities and rural counties, have been left behind—the laid-off factory worker; the waitress and health care worker who struggle to pay the bills—convinced that the game is fixed against them, that their government only serves the interests of the powerful—a recipe for more cynicism and polarization in our politics.

While the stock market has done well, wages have grown at only about 2 percent, below the average 3.5 percent growth of a stronger economy, the Associated Press reported.

Meanwhile, Americans’ participation in the labor force dropped to 62.7 percent, the lowest level since 1978, according to the Bureau of Labor Statistics.