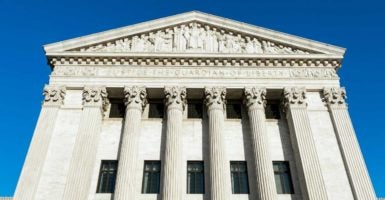 Eighty percent of participants in a new Marist poll say filling the vacancy on the Supreme Court should be an “immediate” or “important” priority for the new administration. (Photo: John Greim John Greim Photography/Newscom)

A new poll finds a significant majority of Americans support the rapid confirmation of a Supreme Court justice who will interpret the Constitution according to its original meaning.

Eighty percent of participants in a new Marist poll said filling the vacancy on the Supreme Court should be an “immediate” or “important” priority for the new administration. The breakdown included 80 percent of Republicans, 53 percent of independents, and 40 percent of Democrats who characterized a swift nomination as an “immediate” priority.

Party affiliation reveals that 78 percent of Republicans, as well as 50 percent of independents, favored the originalist approach. Only 30 percent of Democrats want the justices to apply an originalist model to constitutional interpretation.

Solid majorities of respondents identified religious liberty as a top priority for the high court, and 89 percent of participants—including 66 percent of Republicans, 55 percent of Democrats, and 51 percent of independents—characterize protecting religious liberty an “immediate priority.” Sixty-five percent said a religious accommodation should prevail even if it conflicts with government laws.

“Majorities of Americans—regardless of party—have embraced religious freedom and have rightly rejected the false notion that it is something negative,” said Carl Anderson of the Knights of Columbus, a Catholic philanthropic group which commissioned the poll. “They overwhelming support the protection of our first freedom, the free exercise of religion.”